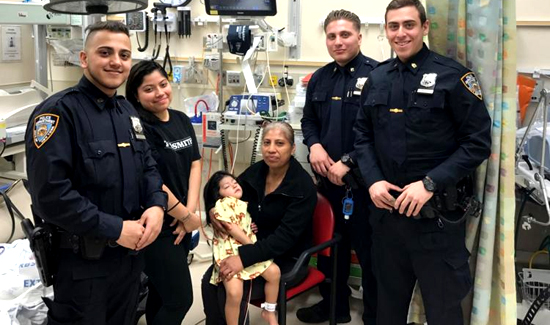 APB moved to NYC from Beantown a few years ago. In the Big Apple, like other overcrowded cities, the challenge of getting through traffic to get someone to the ER is intense.

NYPD officers from across the 40th Precinct in the Bronx worked together to rush a sick baby girl to a hospital just minutes after responding to a 911 call.

Officers raced up the stairs of an apartment building after getting the call about 1-year-old girl Sophia on Wednesday morning.

“She was limp. Not breathing with her eyes rolled back behind her head,” Officer Jospeh Sicari said.

“We wanted to help her,” Officer Muhammad Malik said.

The girl’s grandmother placed the baby in Sicari’s arms. He says he knew he had no time to waste.

“We ran downstairs. I handed Sophia to him in the back seat, Officer Farrugia,” Sicari said.

Officer Andrew Farrugia says he was trying to ask the girl’s name to gauge her condition.

In the rush of an emergency, Sicari was behind the wheel as Farrugia held on to baby Sophia in the back.

“I was just nervous but I was real focused on getting her there as fast as I can,” Sicari said. “I’m a new uncle so I got a nephew and I was thinking that could be him.”

As Sicari and Farrugia rushed to Lincoln Hospital, other officers came on the radio to ask them what route they were taking. Working together, the officers coordinated along East 138th Street and Park Avenue to block off intersections so their vehicle could get through.

The whole ordeal lasted less than five minutes. Officers got the call at 6:10 a.m. They had Sophia to the hospital by 6:15 a.m.

Once inside the hospital, the officers sprinted inside and heard the sound they’d been hoping for.

“We heard her cry then we all felt a little bit of relief,” Sicari said. “She was crying, but at least she’s alive and well.”

The officers aren’t looking to be called heroes. They’re happy with this one reward: a photo of them with a healthy Sophia.

There was also an unexpected surprise in the form of a handwritten “Thank you” note from the girl’s family.

“Thank you to the NYPD guys for answering our 911 call. Now thanks to them for rushing to the emergency room, Sophia is feeling better. We appreciate it!”