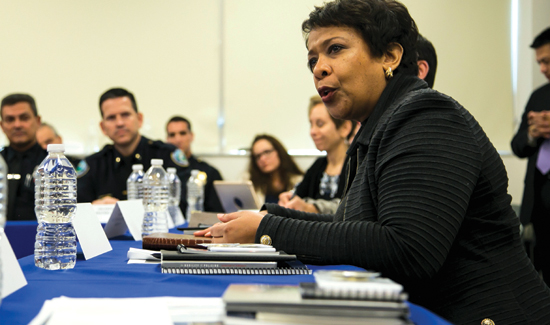 America has found itself at a crossroads, further embroiled in divisive tensions between law enforcement officials and the local citizens they are sworn to serve. The recent shooting deaths of Terence Crutcher in Tulsa, Okla., and Keith Lamont Scott in Charlotte, N.C., have only further encumbered any chance of reconciling the trust that has been lost between the two entities in cities and towns across the nation.

Perhaps the most viable solution to this ongoing tragedy is to return to the “old school” tactics of law enforcement. A study recently released by the Washington-based nonprofit Police Foundation proves that such solidarity can be achieved by convincing cops to park their police cruisers and get back to patrolling the streets by foot.

The study examines the positive impacts of foot patrol programs in five cities across the nation: Cambridge, Mass.; Evanston, Ill.; Kalamazoo, Mich.; New Haven, Conn.; and Portland, Oregon. Analysis of the data revealed that that foot patrol programs improved the relationship between citizens and law enforcement, enhanced the ability of the police force to enforce the law, changed how citizens viewed officers, and reduced both the fear of crime and the number of violent crimes committed.

Additionally, the data show that foot patrols even have psychological benefits for officers, as they have more opportunities for positive interaction with the citizens. Some outside studies quoted by the report have found that smaller communities (like the ones examined in the Police Foundation report) benefit the most from increased foot patrols.

In most of these cities, foot patrols create a better sense of approachability, familiarity, and trust of officers among residents of the community, and in some instances, cities reported higher levels of overall satisfaction with the police from members of the community. For example, a collaboration in Philadelphia between the police force and Temple University’s Department of Criminal Justice found that when they sent foot patrols into the areas of the city with the highest crime rates, those rates often fell as a result.

After three months, the areas witnessed a 23 percent decrease in violent crime and a prevention of 53 violent crimes. If the outcome in Philadelphia is any indication of the success of these policies, the Police Foundation report must be taken seriously.

Bridging the disconnect between police officers and citizens—who see themselves on the same side of promoting human well-being—could certainly help ease the current tensions, and, in a perfect world, even end them completely. The future success of law enforcement nationwide rests on how well agents can serve the communities they protect by keeping citizens safe and by fairly, yet effectively, enforcing the rule of law.

A return to tested and tried tactics like foot patrols might be a small step, but it’s certainly a step in the right direction. If we care about the common good of man and envision neighborhoods where citizens can thrive and truly flourish alongside law enforcement, both entities must trade in their escalating adversarial roles for mutually beneficial partnerships and collaboration.

Anthony B. Bradley is associate professor of religious studies at the King’s College and author of the forthcoming,“Something Seems Strange.” This column originally appeared in the Philadelphia Inquirer.