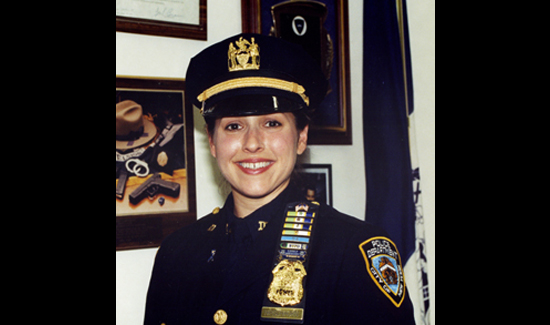 From the time she was a rookie and hit the streets in the 25th Precinct in Harlem, Stefanie Hirschhorn Mount racked up an impressive number of arrests. If someone was breaking the law, she brought them in. She was shot at twice, kicked across the street by a man resisting arrest, and suffered a serious neck injury when a suspect she was chasing made a U-turn and plowed into her police car. Stefanie worked with Street Crimes, a special squad of cops whose mission it is to stop violent crime. Then she went on to a Rape Task Force, where she learned about the painstaking research required to track down leads and identify suspects.

When trying to analyze the public’s animosity toward its police officers, Stefanie said the following: “Hostility towards the police is not unusual. For some people, if you catch them breaking the law, you are stomping on their liberties. They see the police as people who are preventing them from doing what they want to do by issuing them a ticket, arresting them or whatever, and they are angry. On the other hand, if they are victims, you show up with too little too late. You didn’t help them when they needed you. They are traumatized and you weren’t there to stop it.”

Here’s an excerpt from her story from the pages of Brave Hearts: Extraordinary Stories of Price, Pain and Courage by American Police Beat publisher Cynthia Brown.

Stefanie Hirschhorn and Rolando Aleman were finishing up their pasta primavera at Giovanni’s—a popular Italian restaurant up on the Grand Concourse in the Bronx. They had decided to eat right after roll call, which for cops working in the Street Crime Unit was held at the start of each tour on Randall’s Island situated in the East River. Like all their colleagues, they knew if they waited until they were into their shift, the opportunity to break away and grab a bite might never come.

Stefanie and her partner were assigned to the NYPD’s Street Crime Unit, a special squad of about one hundred plain clothes officers working city-wide in neighborhoods plagued with violent crime. Street Crime was a coveted assignment. Only officers with stellar records and lots of arrests made the cut.

The two cops paid their bill, got into their unmarked car, and headed over to the 42nd Precinct to pick up the sergeant who would be riding with them that night.

“In Street Crimes we drove unmarked cars,” Stefanie explained. “Some were better than others. That night we had one of the worst—some sort of K car. I think it was a Dodge Spirit. It had power steering, but the turning radius was horrendous. An 18-wheeler could make a U-turn in a smaller space than we could.”

As they headed down 149th Street Stefanie and her partner were in dead stop traffic when scores of marked police cars, sirens blaring, red lights ablaze, raced past them on the wrong side of the road.

“The traffic on our side was completely backed up,” she remembered. “We wanted to know what was going on. If a cop needs help, the instinctive reaction is to go and help them, but we were trapped.”

As Stefanie and Rolando frantically scanned the police radio channels to see what was up, two young men stepped down from the curb and crossed the street directly in front of their car. “We could see both their guns,” she said. “It looked like they barely noticed us and it certainly didn’t seem like they had a clue who we were. We looked like any other couple out in our Dodge Spirit.”

The officers knew they were at a serious disadvantage stuck in traffic in a clunker. They could see the armed suspects were young which escalated the danger level considerably. If they chased them on foot, they would be out on the street with no cover.

“Once they crossed the street, we made a U-turn,” Stefanie said. “The idea was to pull up in their blind spot. But it didn’t work. As we pulled up to the curb behind them, they made us. Even though we were in plainclothes in a beat up car, they knew we were the police.

Now things happened fast,” she continued. “The suspects ran about ten paces and stopped. One of them yells, ‘Pull out, pull out.’ The second guy pulls out a gun, turns and fires at us. Time stood still except for the long, black tunnel pointed right at me with a ball of fire coming out the end.”

“When it’s life and death, your brain compresses things,” Stefanie confided. “The fear, the tunnel vision, it rules your universe even if it’s just for a few seconds. Looking back, I’m not sure I was processing what was really going on, but I did know only one of them was shooting.

“The shooter and his friend took off in opposite directions. My partner jumped out of the car. The shooter ran east, but I was facing west. I have to catch him, but now I have serious tunnel vision. I threw my coffee cup out the window, tried another U-turn, and barely made the swing.”

Stefanie pulled her Glock and put her foot to the gas. “As I approached the corner where 149th Street intersects Cortland and 3rd Avenues, I see uniformed officers from the 40th Precinct in the middle of the intersection, using the hoods of their cars for cover, drawing down on me. I called in a 10-13. I’ve got my gun out the window and I’m driving fast trying not to lose sight of the perp. They can’t see the police shield around my neck and I don’t have a free hand to dangle it out the window. I screamed at them. ‘I’m a cop, I’m Street Crime. I’m a cop. Get the guy in the red shirt.’”

Hoping they heard her, Stefanie drove her car around the precinct cops. “It’s really crowded right there,” she said. “There’s a subway station, bodegas, fast food places, a newsstand, and always a lot of people.”

Stefanie’s histrionics worked. The cops must have been startled to learn she was one of them. The threat to her life, at least from the uniformed officers, was over. One of the worst disasters in law enforcement, wounding or killing one of your own because you don’t know they’re a cop, had been averted.

As she made a hard left onto Cortland, there he was. “I’m screaming at him and pointing my gun out the window. ‘Knees motherfucker. Down on the ground now. I will shoot you.’ He gave it up. I jumped out of the car, ran over and ordered him down on the sidewalk. Then I pushed him down on the ground. It was obvious he had been through the drill before.”

As soon as the uniformed officers began to arrive, Stefanie asked them to bring the perp and her car back around the corner up to the place she last saw her partner.

She raced back up the street and found Roland standing in the same place where they had been fired on. He was blocking off the perimeter to make sure no one touched or moved anything until the bosses and crime scene investigators arrived to start their painstaking work.

“An off-duty cop who was out shopping saw the second guy dump his gun in a garbage can,” Stefanie said. “When that officer saw the guy mingling with the crowd and watching the scene, she alerted a uniformed cop and the second perp and his gun were snatched up.

“The adrenaline was raging so my memory is a little foggy, but I remember having this overwhelming urge to touch my partner. I grabbed him to make sure he was still in one piece. I kept asking him if he was okay.”

Once the incident was broadcast over the division radios as a 10-13, every available officer in the area raced to the scene. Eventually Stefanie and her partner were taken to the hospital, standard procedure for officers who have been involved in an incident like this. Even though the doctors and nurses told Stefanie and Roland to breathe deeply and calm down, it took hours before their adrenaline levels were back to normal. Stefanie’s blood pressure is normally low, but when the doctors took a reading, it was high.

They learned the person who shot at them was fourteen years old. Eventually, the case was plea bargained out and the boy got three to six years.

“I think he served a third of that,” Stefanie recalled. “At his sentencing the judge told the boy he hoped he’d seen the last of him, but somehow he didn’t think he had. The other man was over eighteen but the penalty for him was less. He had removed the clip from his gun so he was only charged with a misdemeanor because his gun wasn’t loaded.”

Over the course of her career, Stefanie Hirschhorn has been the recipient of many awards and medals. But without hesitation she says the Exceptional Merit Award she got for arresting the boy who tried to kill her and her partner is the one she is most proud of.