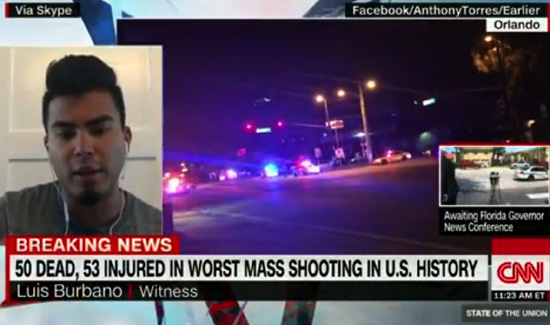 Via The Orlando Sentinel:

The city of Orlando ordered a police officer diagnosed with post-traumatic stress disorder after the Pulse nightclub mass shooting to go back to work Monday in a clerical role, but he did not show up.

Gerry Realin’s doctor said he was fit enough to do clerical work, but only outside the Police Department, according to the city.

On Thursday, the department assigned him to the city’s STOPS safety program that runs the red-light camera system. Realin would help run a new bike-safety program.

Orlando police Deputy Chief Orlando Rolon said the program office is in City Hall and is not associated with the Police Department – but Realin argues that it is.

Rolon said Realin will have to start using sick time if he doesn’t come in and state a reason why he isn’t showing up.

Realin said he’s following the advice of his doctors.

“When my health is on the line who do you follow — doctors or a deputy chief and a city attorney?” Realin asked. “For me it’s a no-brainer: my doctors.”

Rolon said the department has “bent over backwards” to help Realin, who he said would be allowed to continue to receive treatment on duty.

“We just feel that we are being very, very flexible as he’s recovering,” Rolon said. “In this case, we are just following the norm. We will take care of you and we will pay your salary if you have an injury. But as soon as you are given a limited-duty status you are expected to come back.”

Rolon said the department will reassess the situation if Realin continues not to show up and his sick and vacation time run out.

Attorney and former Florida Rep. Mike Clelland, who specializes in representing first responders and is not associated with the case, said the situation would be up to Realin’s lawyers.

“I think the question becomes whether it’s worth arguing that this is outside what the doctor contemplates when he said ‘outside the Police Department,’ ” Clelland said.

Realin’s wife told the Orlando Sentinel the couple’s attorneys are considering filing an order that would ask a judge to prohibit the city from interfering with his treatment.

Gerry Realin was on the team that had to remove bodies after the Pulse nightclub attack on June 12 that claimed the lives of 49 people and injured at least 68 others.

He went back to work for a couple weeks, but doctors said he was not able to work because of PTSD.

The department started paying his full salary after his worker’s-compensation benefits ran out, but it is not required to do so because the benefits do not include PTSD-only injuries.

He was hired as a police officer not a clerk. His test to become a cop was not his typing skills.,but a aptitude to good and fast judgements. There is no cure for ptsd, the medication given for ptsd will keep him from staying awake and not alert could be life treatning.