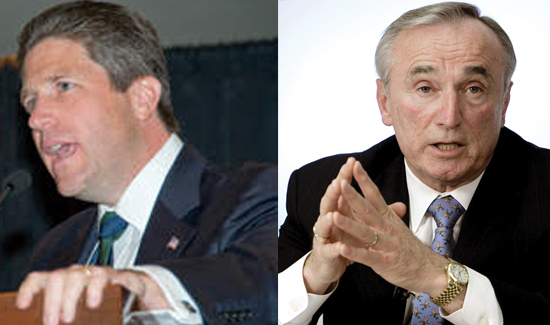 After a week of silence in the face of growing police boycotts, Quentin Tarantino faces mounting pressure to respond to their anger over his calling cops “murderers.” The outspoken director, whose new movie “The Hateful Eight” on Christmas, has thus far remained silent.

Officers unions in Los Angeles and Philadelphia have joined the NYPD in blasting the director’s comments last weekend, where he labeled cops “murderers” at a rally against police brutality.

“He was doing what’s called ‘watchful waiting,’” veteran crisis expert Howard Bragman told The Wrap, saying the past few days were a test of the boycott’s stamina. “It goes away, or it gets worse. After Philadelphia joined the protest, it certainly didn’t go away.”

Bragman also said he’d be worried that “not just the rank and file, but [New York Police Commissioner] Bill Bratton is trashing him.”

Tarantino’s silence rings loud. Reps for the Oscar winner and his “Hateful Eight” distributor, The Weinstein Company, have not responded to numerous requests for comment as the protest gained steam.

“The other unions joined New York as a show of support, and they’re taking their lead. I’d imagine they’re looking for an apology,” a law enforcement insider told The Wrap on the condition of anonymity.

“There are no words to describe the contempt I have for him and his comments at this particular time,” Bratton said Tuesday. New York police union president Patrick Lynch escalated things by saying “New Yorkers need to send a message to this purveyor of degeneracy.”

Those hefty character attacks might be too big to ignore, with holiday box office and awards contention on the line.

“I think he should make a nice statement that’s also true — that police make mistakes, but there are plenty of bad criminals. The truth is likely somewhere in the middle,” Bragman said. “This can spread to other unions like firemen and teachers too.”

When asked what conditions would need to be met to call off the boycott, a Los Angeles police media liaison had no comment. Spokesmen for New York and Philadelphia police were not immediately available, but some aren’t surprised the organizations are so aggressively speaking out against the often-controversial director.

Tony Tarantino, the father of world famous movie producer Quentin Tarantino, says his son is dead wrong about police officers being murderers. “I love my son and have great respect for him as an artist but he is dead wrong in calling police officers, particularly in New York City where I grew up, murderers,” Tony Tarantino said. “He is a passionate man and that comes out in his art but sometimes he lets his passion blind him to the facts and to reality. I believe that is what happened when he joined in those anti-cop protests,” Tarantino added. “I wish he would take a hard, dispassionate look at the facts before jumping to conclusions and making these kinds of hurtful mistakes that dishonor an honorable profession. We have many friends and relatives who have served honorably in the NYPD and the LAPD and clearly, they risk their lives to keep the rest of us safe. Cops are not murderers, they are heroes.”

PBA president Patrick J. Lynch said: “We are very grateful to Tony Tarantino for having the courage to speak out and support the police. It is not easy criticizing someone you care about. But his son, Quentin Tarantino, has insulted the very people who protect his freedom of speech and who facilitate the making of his films. He owes an apology to law enforcement officers across country and we will continue to encourage the boycotting of his films until he makes such an apology. The list of police agencies across the country who will boycott Quentin Tarantino’s films is long and growing. ”Tony Tarantino is an actor, musician and film maker in his own right. He was born in Queens, New York and credits local police officers and his involvement in the Police Athletic League for setting him straight in his youth.

The Patrolmen’s Benevolent Association of the City of New York (PBA) is the largest municipal police union in the nation and represents nearly 50,000 active and retired NYC police officers.