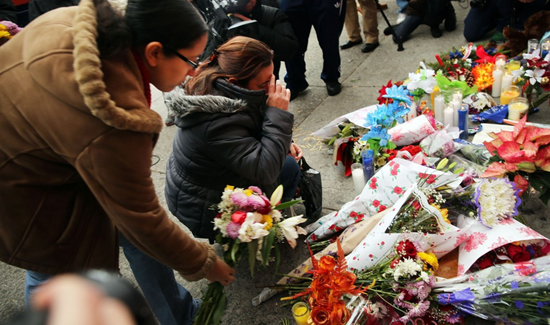 Our nation’s battered and bruised, black and blue.
Racism? Minorities being targeted?
Blue comes in many shades,
but the pain felt will never fade.
Brothers in blue, united as one,
devastated the minute it rose the gun.
Is this the justice you desire? Destroying oneself by fire.
Change by violence, is utter nonsense.
Execution. Cowardice denies the prosecution.
Tears streaming down my face,
I look at my world in such disgrace.
Where is love? Where is humanity?
One more news story and I’ll lose my sanity.
Black lives matter, but so do blue.
The more we demolish, the less we can undo.
The war in which we are engaged, continually fueled by rage,
ending with nothing but loss.
No survivors, no winners, no spoils.
Another holiday spoiled.
Too many tables with empty chairs,
the world is beyond repair.
Two brave men lost their lives today,
brothers in blue, forever they will stay.

Michael Nicholson is the son of Dave Nicholson, the Funds Administrator for the PBA of New York City. Dave is a retired Sergeant. His partner, Keith Levine, was killed in the line of duty 23 years ago on December 28, 1991.