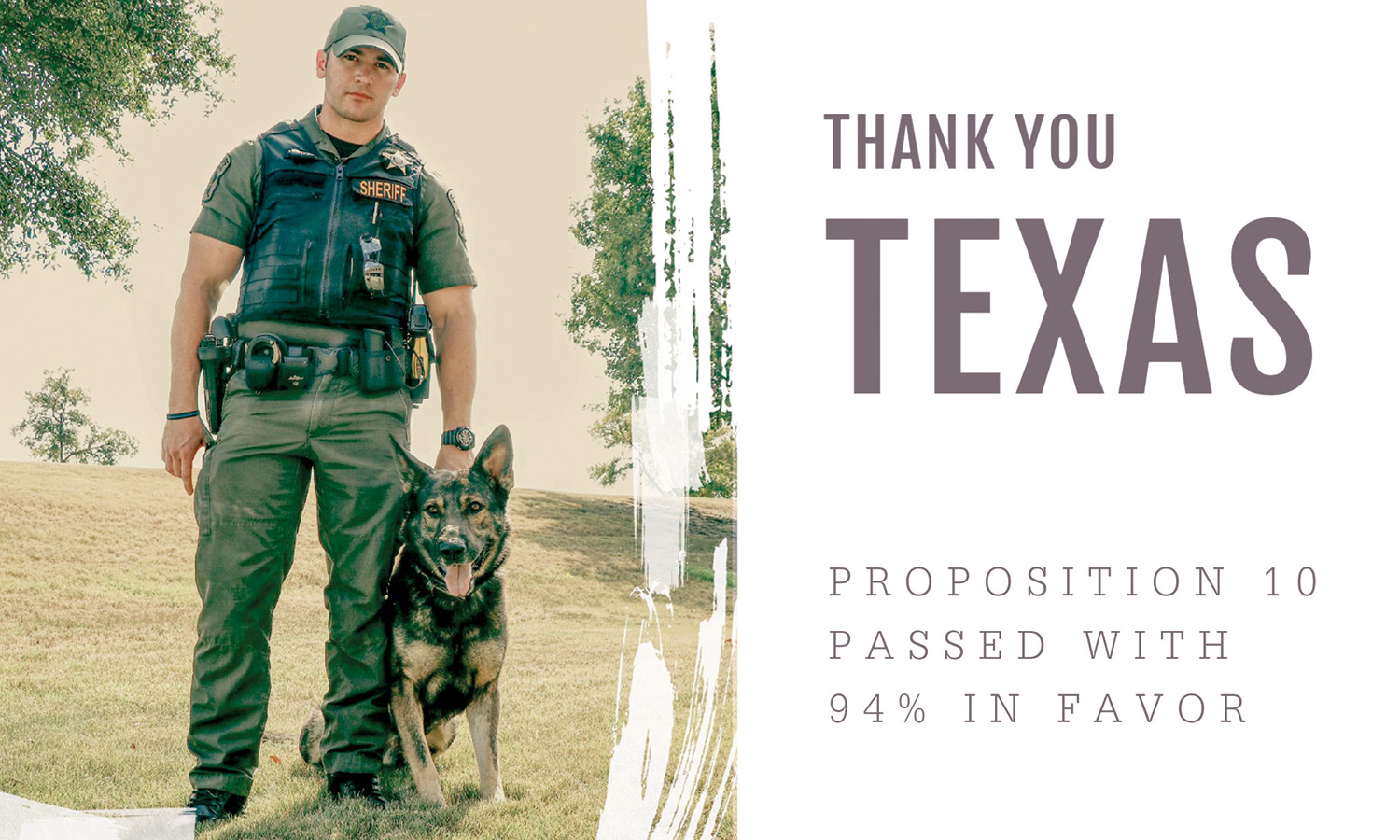 Police animals play a vital role in keeping our communities safe — and they do so with unquestioned bravery and loyalty. Throughout the course of their duties, these K-9s and horses often develop strong bonds with their handlers, who provide them with basic care along with love, attention and companionship. So it’s only natural for these animals to get to live with their handlers when they reach their retirement.

Unfortunately, that’s not always the case. Some states have it written into their constitutions that these law enforcement animals are surplus government property not to be used for private benefit, so they’re not eligible for adoption and can only be auctioned, donated or destroyed (euthanized).

Fortunately, the people of Texas realized how antiquated the law was and decided to make a change.

Voters came together recently to pass a new state measure, Proposition 10, which allows police dogs and equines to live out the rest of their lives with their handlers or other qualified caretakers upon retirement. The measure passed overwhelmingly with a 94% vote.

“Police dogs develop a special bond with their handler, and — after a lifetime of public service — deserve to spend their golden years with their companion,” Senator Jane Nelson, co-author of the amendment, said in a statement. “These dogs should not be auctioned off as property.”

State Senator Brian Birdwell, who supported his colleague’s measure, wrote a memo to constituents earlier this year highlighting the importance of having retired police animals placed in the care of individuals who can cater to their unique needs.

“Few people are qualified to humanely care for and properly supervise a police dog or horse, and these animals need to be cared for by a capable individual at the end of their service,” he wrote. “[The amendment would] protect these animals to ensure they are going to a proper home after their retirement from service and save taxpayer dollars from continued housing and care of the animal.”

According to Fox News, prior to the amendment’s passage, many sheriff’s offices and police departments in the state worked around the archaic law. For example, in 2017, Collin County Sheriff Jim Skinner decided that rather than retire two older and sick K-9s, he would place them out of active duty to prevent them from being euthanized or auctioned off. But this wasn’t a perfect solution. Keeping the elderly dogs out of duty didn’t allow the department to bring in new K-9s to take their place. Another example comes from the Austin Police Department, which cleverly sold their retired K-9s and horses to their handlers and employees for the low, low price of $1 to comply with the law.

“It’s the right thing to do,” Skinner told the Washington Post about why the measure was so important. “There’s been a lot of great dogs with great handlers, and the right thing should have been done by them. But it’s better late than never.

“There’s different ways that people have tried to deal with this,” he continued. “But here’s the reality: We’re peace officers, and we stand for the rule of law, and we want to do the right thing. We’ve asked for this exception, to not treat these animals like property, for all the obvious reasons.”

The amendment represents another major win for police animals and handlers in the state this year. In May, Governor Greg Abbott signed into law SB 2100, a companion motion authored by Nelson and Birdwell that allows families of handlers killed in the line of duty to adopt their loved one’s K-9 partners.