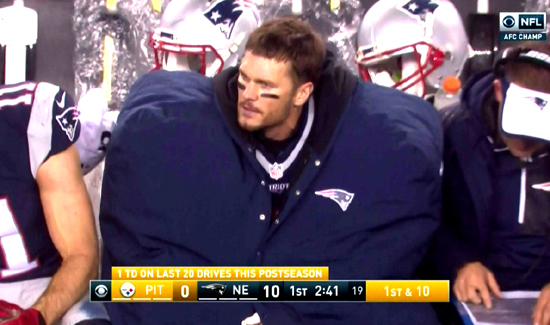 At least he was honest.

That’s an early entrant for quote of the year.

Dennis Harrison appeared in East Boston Municipal Court on Monday, just hours after his favorite team, the New England Patriots, defeated the Steelers, 36-17, in the AFC championship game. Harrison pleaded not guilty to charges of disorderly conduct, disturbing the peace and setting off a false fire alarm. He was released on personal recognizance.

Pittsburgh spent the night before the game at the Boston Hilton Logan Airport Hotel (most Patriots’ opponents fly into T.F. Greene Airport in Rhode Island and stay in Providence); according to the police report filed in court, Harrison spent Saturday night at a housewarming party in nearby Revere, where friends dared him to pull the alarm.

According to State Police, one of Harrison’s friends drove him to the hotel; Harrison entered the hotel, which is on airport property, through the main entrance and walked to the second floor, pulling the nearest alarm.

He ran out of the hotel and toward his car, but not only was his friend gone, so were his car keys.

Harrison began walking away from the hotel, but was stopped by police. Allegedly, he initially told them he was waiting for an Uber ride, but after a little more questioning admitted he had pulled the prank, rudely rustling the Steelers from their slumber.

“Harrison informed me that he knowingly and willingly activated the fire alarm system with the sole purpose of attempting to disrupt the Pittsburgh Steelers football team,” Massachusetts State Trooper Bryan Erickson wrote in a report.