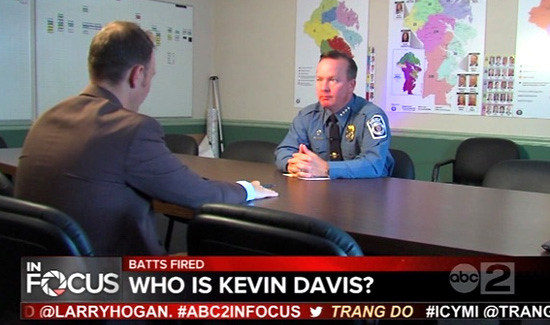 Via The Baltimore Sun:

Known on the streets as “knockers” or “jump-out boys,” the officers were most often seen wearing tactical vests, jeans and backwards hats as they prowled the city for guns and drugs.

Davis said they have also been the officers most likely to be the subject of complaints, and he had become increasingly concerned that their style “accelerated a cutting-corners mindset.”

On Tuesday night, he ordered 46 officers from the agency’s centralized intelligence unit back into uniformed patrol. Another 100 officers in operations squads in districts were ordered into uniform last week.

“I’m not a big fan of these modified uniforms, these tactical vests, the T-shirts, the jeans, the baseball caps,” Davis told The Baltimore Sun on Wednesday. “I don’t think it represents our profession the way it should, and I’m doing away with it.”

The moves come a week after seven members of the department’s Gun Trace Task Force were indicted on federal racketeering charges. They are accused of robbing and extorting citizens, filing false police reports and receiving fraudulent overtime pay. One of the seven officers was also charged in an alleged drug conspiracy.

Authorities said a Drug Enforcement Administration investigation into an illegal drug organization led to the officer facing the drug charges, who led to the rest of the gun unit. The probe eventually involved the FBI and electronic surveillance — including a recording device placed in a Baltimore police vehicle that prosecutors say picked up the officers discussing an array of crimes.

The officers have pleaded not guilty. They have all been held pending trials.

Police in uniform are a great symbol.

I’m curious as to how much plainsclothes officers reduced crime vs uniformed. Show us the numbers!