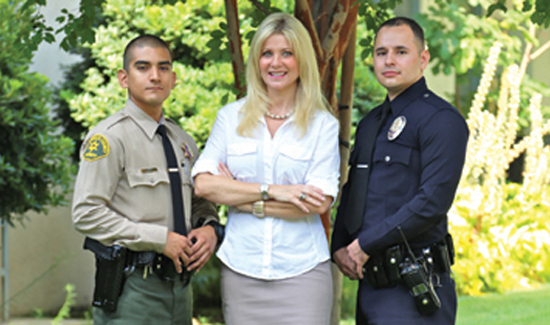 Cesar Corrales was one of the first graduates of Reseda High School’s Police Academy Magnet School, which is run by the nation’s second largest public school system – The Los Angeles County Unified School District. Today he serves proudly as a member of the Los Angeles Police Department.

“The Magnet School had very high expectations of its students,” Cesar said. “And that kept me on track. I learned discipline in that program and that helped me become a better person.” Cesar’s high school friend Alex Martinez, also graduated from the Reseda’s Police Academy Magnet school. He went on to become an MP for the U.S. Marine Corps before joining the Department of Defense as a Military police officer.

So far the success has been spectacular. Reseda keeps turning out outstanding graduates who go on to have successful law enforcement careers. Here’s just a few of our many success stories:

* Hector Lobos went on to college and is now serving his community as a Los Angeles Deputy Sheriff. Interested in law enforcement at an early age, Hector wanted to attend a school that focused on his career goal. “Reseda’s Police Academy helped me focus,” he saidPro like this one should be available to teenagers all over the country.”

* Officer Carrie Seo, another graduate, went on to become a U.S. Navy Military Police Officer before becoming a corrections officer in the State of Arizona. “As a parent, I hope one day my children will want to be apart of something productive and unique like I was,” Seo said.”

* Brian Carver’s another graduate. Officer Carver Joined the LAPD in 2014 and believes the program especially benefits students who are interested in law enforcement, but unsure of pursuing a law enforcement career.

Referred to the program by his uncle, an officer with the Los Angeles Police Dept. at the time, Greg is now a Military Police Paratrooper stationed at Fort Bragg, North Carolina. The Police Academy Magnet Schools are made possible through an ongoing partnership between the LAPD and the School District. The LAPD assigns a full time officer to Reseda High School where he or she works as both a teacher and mentor. LAPD Detective Marc Madero, an officer in the program from 1999 to 2007, says his job in Reseda’s Police Academy was one of the most rewarding he’s had with the department. For more information on Reseda High School’s Police Academy Magnet school visit them at: www.resedapoliceacademymagnet.com