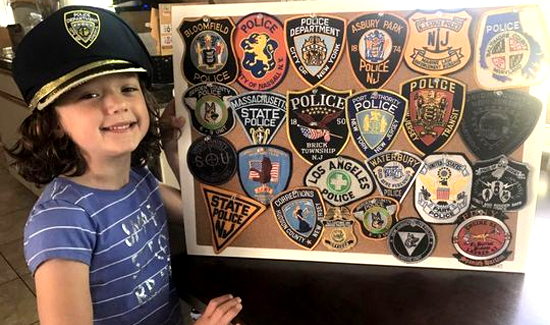 But with years left before that can become reality, this Midstreams Elementary second-grader is already working hard to help police departments.

Weeks ago, Morgan sacrificed birthday presents from her seventh birthday party and asked her friends to instead donate money to her police K-9 bulletproof vest fundraiser.

Police dogs need vests “so they don’t get shot or hurt,” Morgan said from the living room in her Brick home, where toy police cars, a stuffed German shepherd, police department patches and other tokens of her love for law enforcement lay on the couch.

“If somebody shoots him (the dog) in the vest, it won’t go to his skin,” Morgan explained.

Morgan, who expresses her adoration for police by wearing her miniature police uniform outside the house on occasion, managed to raise all the money for a K-9 vest within a day of launching her fundraiser, her mother Lauren Blann said. The beneficiary is the Robbinsville Township Police Department’s drug-sniffing dog Quori.

Quori, a two-year-old yellow Labrador Retriever, has been trained to sniff drugs since he was just eight weeks old, said his handler, Robbinsville Police Sgt. Scott Kivet. Since joining the police force last year, the dog has helped to make more than 90 drug arrests, he said.

In a year, Quori has become a beloved part of Kivet’s family, licking the sergeant’s five-month-old baby after work each day as well as the faces of local school children during public relations events with police.

The friendly, jumpy lab is helping to break stereotypes about aggressive and intimidating police dogs, said Kivet, who added that he is grateful for Morgan’s fundraiser.

“The overwhelming support from this little girl is great,” said Kivet. “I’m glad she could protect him in this kind of way.”

In fact, Morgan reached her fundraising goal so quickly that she decided to keep going. She managed to raise enough to purchase a K-9 medical supply kit and cash for the next dog vest that needs donating, Lauren Blann said.

Morgan raised the money for Vested Interested in K9s, a Massachusetts-based nonprofit organization that raises money for bullet-proof and stab-proof vests for police dogs.

Each dog’s vest market-rate value is between $1795 to $2234, according to the organization.