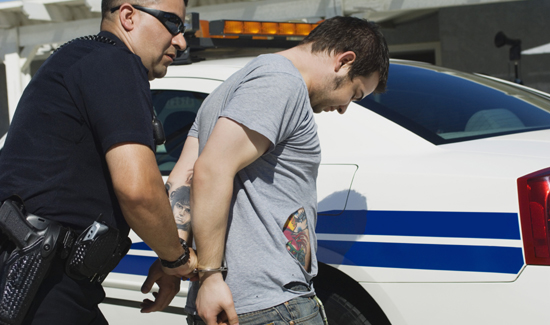 President Donald Trump’s statement encouraging police officers to be “rough” with people they arrest has drawn criticism in law enforcement circles for sending the wrong message at a time of heightened tensions with the public.

“As a department, we do not and will not tolerate ‘rough(ing)’ up prisoners,” the Suffolk County Police Department said in a statement.

Speaking before law enforcement officers, Trump praised the aggressive tactics of immigration officers and suggested that police shouldn’t protect the heads of handcuffed suspects being put in the back of a car.

“When you see these thugs being thrown into the back of a paddy wagon. You see them thrown in rough. I said, ‘Please don’t be too nice,'” Trump said to applause, referring to officers shielding prisoners’ heads with their hands.

“Like, don’t hit their head and they’ve just killed somebody. I said, ‘You can take the hand away, OK?'”

From Boston to Los Angeles, however, law enforcement agencies pushed back.

Suffolk County police have been under Justice Department oversight since 2013, after a federal investigation exposed a pattern of anti-immigrant violence.

A Boston Police Department statement said its “priority has been and continues to be building relationships and trust with the community we serve. As a police department we are committed to helping people,not harming them.”

In New York, Police Commissioner James O’Neill said in a statement that to “suggest that police officers apply any standard in the use of force other than what is reasonable and necessary is irresponsible, unprofessional and sends the wrong message to law enforcement as well as the public.”

The head of the New York City agency tasked with investigating complaints against officers also denounced the remarks.

“President Trump’s comments fly in the face of the responsibility our city’s officers display in the line of duty,” Maya Wiley, chairwoman of the Civilian Complaint Review Board, said in a statement.

“But for many communities in our city, President Trump’s comments only (stoke) fears of interacting with officers. President Trump’s speech today was shameful, dangerous, and damages the progress our city has made toward improving police-community relations.”

The Gainesville, Florida, police department said on Facebook the President “has no business endorsing or condoning cops being rough with arrestees and suggesting that we should slam their heads onto the car while putting them in.”

Trump’s remarks “set modern policing back and erased a lot of the strides we have made to build trust in our community.”

“I’m a cop,” he wrote. “I do not agree with or condone @POTUS remarks today on police brutality. Those that applauded and cheered should be ashamed.”

A Los Angeles police spokesman, Mike Lopez, said the department will “treat everyone with integrity and respect.”

The Portland Police Bureau in Oregon expressed similar sentiments on Twitter, saying that officers were “expected to treat everyone with dignity & respect, even when they are a suspect.”