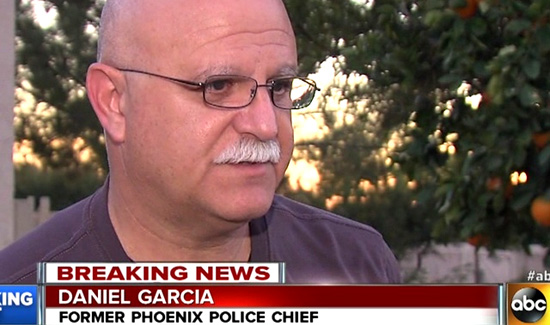 Phoenix Police Chief Daniel Garcia has been fired after he held a news conference demanding a new two-year contract. Garcia was terminated by City Manager Ed Zuercher on the grounds of insubordination, according to The Arizona Republic. Zuercher said the decision was not about Garcia’s performance as chief. “I think Chief Garcia has done a good job, all the men and women of the department have done a good job,” Zuercher said, “but let me be clear, this issue is about following orders, about obeying an order from a supervisor. I gave him an order not to have a press conference, but he directly disobeyed. He’s a good man, but I’m disappointed in his choices.”

Chief Garcia has raised the ire of the Phoenix Law Enforcement Association on more than one occasion. PLEA President Joe Clure said he was outraged when the chief refused to help Officer Craig Tiger who was diagnosed with PTSD during treatment for alcohol abuse after he was arrested for DUI one year following an incident where he was forced to take the life of a suspect. Instead the chief opted to fire Craig. After he was fired, his ability to continue with needed psychological counseling for diagnosed PTSD was greatly diminished. After his termination, Craig continued to struggle with the demons of depression and nightmares that continued to plague him. He ultimately took his own life this past November. Click here to read more about Tiger’s story.

So what does the story of Craig Tiger(as sad as it is) have to do with Chief Garcia’s termination?