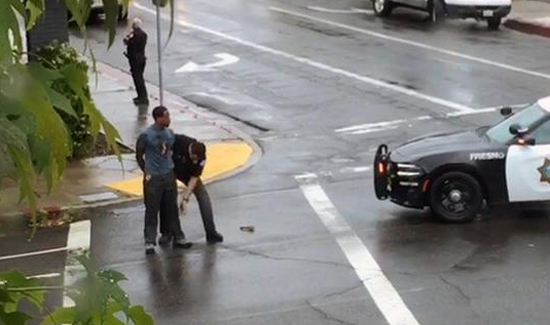 A man fatally shot three people in less than two minutes in what police in Fresno, California, are calling a hate crime.

The three victims from the shooting rampage Tuesday were white, and apparently chosen at random, police said. The suspect, Kori Ali Muhammad, 39, is black.

“We do not believe … that this is a terrorist-related crime,” Dyer told reporters. “This is solely based on race.”

The FBI is assisting in the investigation.

A 34-year-old PG&E truck passenger and two other men — a 37-year-old and a 58-year-old — in downtown Fresno, were shot, Dyer said. Two of the victims were near Catholic Charities and were clients of the social services agency, he said.

The slain men are believed to have had no connection to Muhammad.

Muhammad is also accused of firing at a 59-year-old white man coming out of a house, but he missed, the police chief said.

He also allegedly pointed the gun at three Hispanic women — a woman, her adult daughter and her 4-year-old granddaughter — who heard the gunshots and got into their car, which had trouble starting. Muhammad approached on the passenger side and pointed the gun at them, but didn’t fire, Dyer said.

Muhammad will face four counts of murder and two counts of assault with a deadly weapon, officials said.

The fourth murder count is from a previous incident last week.

The shootings occurred within a block-and-a-half of each other, Dyer said.

Officers found Muhammad running on the street after shooting his last victim.

He surrendered to police, telling an officer: “I did it. I shot them,” the police chief told reporters.

“You guys are looking for me,” he also allegedly told them.

Muhammad was being sought in the April 13 slaying of Carl Williams, 25, an unarmed security guard shot outside the Fresno Motel 6. Williams was shot multiple times that night and later died at a hospital in what police described as an “unprovoked” shooting.
Police had published a photo of Muhammad, asked for the public’s help in finding him and offered a reward.

Muhammad shaved his head and face to change his appearance, Dyer said.

“He made a decision to himself that he was not going to go to jail for shooting a security guard, that he was going to kill as many people as he could today and that’s what he set out to do,” the police chief said.

Muhammad had prior run-ins with the law, court records show.

In 2005, he was indicted on charges of cocaine possession with intent to distribute, and possession of two rifles and a semiautomatic handgun.

His then-public defender raised questions on whether Muhammad was mentally fit to stand trial, noting that on several occasions, he had “appeared eccentric with some bizarre beliefs” and appeared to have hallucinations.
He also said he’d had “at least two prior mental health hospitalizations.”

A psychiatric evaluation found that Muhammad suffered from psychosis and a substantial degree of paranoia. He was declared not competent to stand trial in July 2005.

After an order committing him to a facility in October 2005, he was later found competent for trial in 2006.
Muhammad pleaded guilty and was sentenced to 110 months in prison, which was reduced to 92 months.

This was obviously both racism and terrorism several times over.