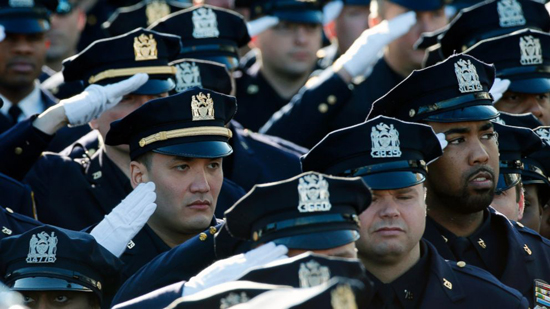 The funeral for Rafael Ramos, one of two officers assassinated in their patrol car in New York City nine days ago, was held yesterday. This in-depth account of the funeral and burial service by reporters from the New York Times is the most comprehensive we found. A link to entire article is posted below.

Over 20,000 uniformed officers from all over the United States and Canada traveled to New York City to show their respects. Many drove all night to be there for the early morning service. Vice President Joe Biden delivered a moving eulogy (click here to watch the video), telling the Ramos family they should be comforted to know they have 25,000 New York City police officers who will always be there for them. He called the NYPD “the finest police department in the world, where every officer has taken on a sacred trust.”

Ralph Viscio, a retired NYPD veteran, said it was the largest single turnout he had ever seen for a police funeral.

“This funeral is different,” he told reporter Sandra Garcia. “They were gunned down doing their job, day to day, not asking for anything special. It brings back memories of the ‘70s. Back then there were racial problems all over the United States. Fellas in uniform in the country were singled out. I think everyone felt this one.”

“Their blood on the ground is our blood on the ground,” retired NYPD Officer Zachary Slavin told reporter Elizabeth Harris. Slavin said he had attended other large funerals for fallen officers but this one was one of the largest he had seen. “This is exceptional because the event was exceptional. It highlights our vulnerability. Everyone wants to go home, but you know you may not, every day for 20 years.”

On the somber trip from the church to the cemetery, scores of New York City police motorcycles were joined by dozens of other departments, including a contingent from the New Orleans PD, as they escorted the hearse on its sad journey.

“Every time I attend a cop’s funeral, I pray it will be the last,” NYPD Commissioner William Bratton said. “But I know it won’t. As I look into the faces of the loved ones left behind, whose worst fear has been suddenly realized, I hope, ‘Never again.’ But here we are.” Bratton’s eulogy (click here to watch highlights) received several standing ovations.

Tensions are still raw in the city, especially between New York City Mayor Bill de Blasio and the men and women of the NYPD. The New York Times story (link below) includes a video posted to YouTube by the NYC Fire Wire that shows a whole street full of uniformed officers turning their backs away from the church when Mayor de Blasio starts speaking at the funeral.