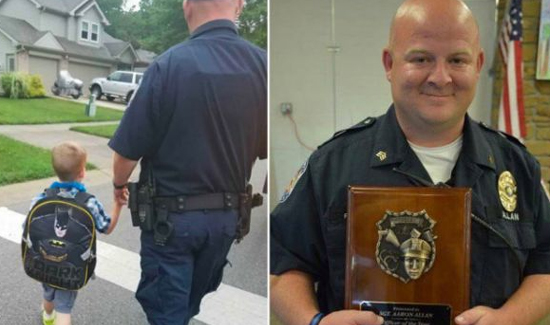 An Indiana police officer killed in the line of duty last week saw his son off to school hours before his death, an interaction seen in a touching photo released by his department.

Southport Police Department Lt. Aaron Allan walked his son to the bus stop on his first day of kindergarten on the day he was killed, police said.

“The child, nor his father, knew this would be the last time they saw each other,” the Fremont Police Department wrote on Facebook along with the photo.

Allan, who has two sons, was responding to the scene of a car crash in Southport to aid a driver who crashed through a fence and flipped his car.

“He was one of the best we’ve had,” John Benton, an officer with the Southport Police Department, told InsideEdition.com. “He was fair and he showed that fatherly side to the people that he came across.”

Allan was an officer with the department for six years and had worked in law enforcement for 20 years.

“Anytime that you are in law enforcement or public safety setting, with him being a father, there’s something a little different that we have to go through,” Benton said. “He was a fantastic police officer.”