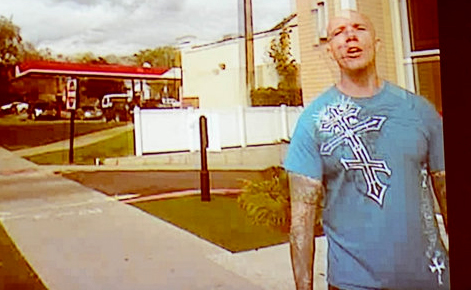 Both police officers were injured in the Sept. 28 altercation, which began with reports of Peterson allegedly trespassing and harassing employees at a building that includes a massage school before being shot in a Maverik parking lot at 300 South and 500 East, according to Salt Lake City police.

“These are tragic situations,” Salt Lake City Police Chief Mike Brown said at a news conference called by Gill. “No officer wants to be engaged in a gun battle like that.”

Gill showed officer Lovell’s body camera footage, a video shot from a bystander’s cell phone, and security camera video from the Maverik where the shooting happened. Oblad’s body camera footage was not available because the officer, believing he was done for the day, had just begun charging it, according to Gill.

“Officer Lovell did everything in his power to de-escalate the situation,” Gill said. “You can see how it progressed up and how he went in a series of graduated use of force and when those failed, how that escalated up.”

The released video shows Lovell using a Taser and a baton before Oblad fired shots.

Lovell had responded to the reports of a man trespassing at a building that houses a massage school and beauty salons at 363 S. 500 East, where he had allegedly grabbed a woman’s buttocks. The officer followed Peterson, a recently released prison parolee, down 300 South toward the Maverik parking lot, telling him to stop and talk.

Peterson got into the driver’s seat of a stranger’s jeep in the Maverik parking lot. After Peterson refused to get out of the jeep, Lovell used the Taser on him. Peterson shouted profanities, jumped out of the jeep and assaulted the officer. Lovell tried the Taser again, which reportedly didn’t phase Peterson.

Video shows Peterson punching and chasing an officer, who backed away, fell and reached for his baton. The baton rolled away from the officer, and then Peterson grabbed it and beat the officer.