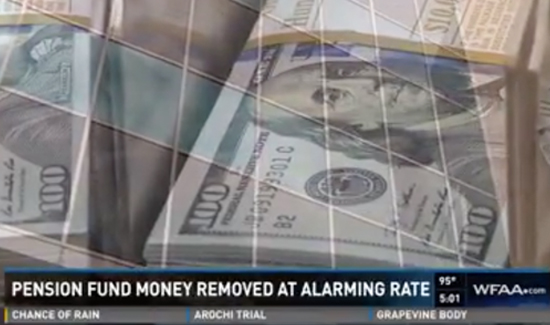 Ken Sprecher was a Dallas police officer for 31 years. He retired in 2005 believing he was promised to receive a great pension.

“That was the selling point when you recruit and try to retain folks. That you may not make it up-front with salary but that you would have a secure pension later on.”

But the pension fund is in trouble and in danger of going bankrupt. That’s causing some officers and retirees to begin withdrawing their retirement funds and rolling it into their 401Ks.

News 8 has learned a that one assistant chief recently withdrew more than $1 million, and sources say nearly $300 million has been withdrawn throughout the department.

“We are in a serious situation and I think everyone needs to be concerned right now about where we are and where we need to go to get out of this.”

The panic that has set in forced the chairman of the pension board Sam Friar to issue a letter to members.

“I would strongly urge all members not to act rashly and without full information,” he wrote. “You may make decisions that, after all the changes are made, are not in your best interest.”

The board was so concerned it voted to stop current officers from withdrawing any money from their pensions, and sources say the board will soon vote to no longer allow retirees to take their money out.