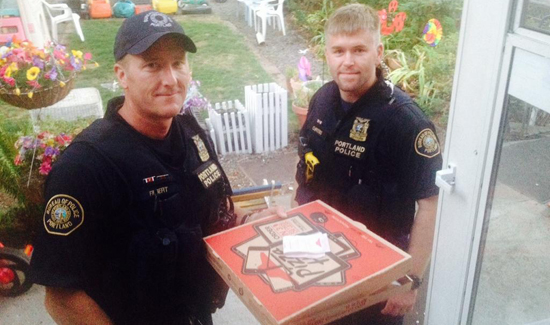 When it comes to law enforcement and social media there are basically two kinds of stories. The first and more frequent type usually runs with a headline like “Police officer fired because he thought there was a privacy setting on Facebook.” But the second type is the kind of thing that guarantees smiles, back patting and cost-effective public relations. For instance, two Portland police officers recently completed a pizza delivery after a delivery driver was injured in a crash police responded to.

Steve Huckins told KOIN 6 he couldn’t believe his eyes when two uniformed cops arrived at his door with the pizza.

“They turn around to leave, and I said, ‘whoa, whoa, whoa — I got to get a picture of this,'” Huckins told KOIN. “No one is going to believe Portland police delivering a pizza.”

Since then it’s gone totally viral with millions of views.

That’s how you use so-called “social media.” By keeping in mind the fact that Facebook, Twitter and all the rest are in fact broadcast technologies and using them strategically and effectively.

Oh yeah – doctors say the delivery guy from the accident is going to be fine.

Use image I sent earlier with Twitter info below identifying officers.