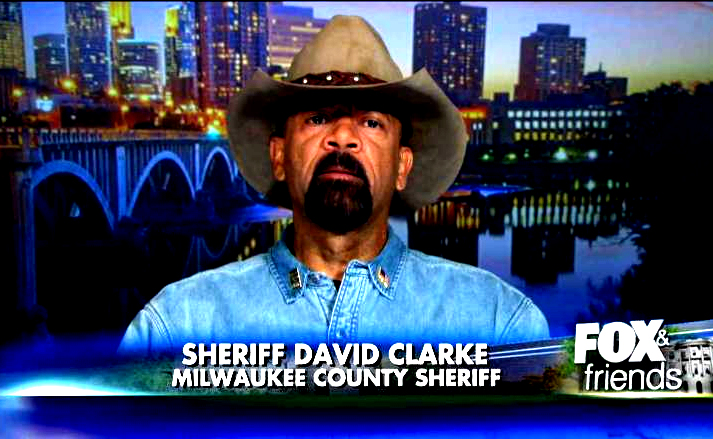 Via The Business Insider:

A man in a jail run by Sheriff David Clarke died after almost a week without access to running water — but that did not stop the jail from continuing to withhold water to punish inmates.

Terrill Thomas, 38, was found dead on the floor of his cell at the Milwaukee County Jail just eight days after he was admitted in April 2016, the Milwaukee-Wisconsin Journal Sentinel reported on Monday.

The Associated Press later found that, according to jurors’ jail logs, the officers withheld water as punishment for two other inmates after Thomas’ death.

Prosecutors later determined that Thomas, who was known to suffer from mental illness, died from severe dehydration after officers cut off access to his water as a disciplinary measure shortly into his stay and never turned it back on.

The details of Thomas’ death first became public on Monday after prosecutors began an inquest into whether to charge any of the jail personnel in connection with the death. By Monday evening, jurors determined there is probable cause to charge all seven staff members, according to a local news report.

An inquest is a judicial inquiry that allows prosecutors to question witnesses in the court under oath prior to filing charges.

“When a mentally ill inmate, like Mr. Thomas, is locked in solitary confinement without access to water, his life is totally in his jailors’ hands,” he wrote.

A Milwaukee-Wisconsin Journal Sentinel reporter present at the inquest wrote that prosecutors showed a six-person jury how, along with policy violations and disregard for Thomas’ mental illness, “inattentiveness by corrections officers led to Thomas’ death.”

Benkley told the court that three officers turned off Thomas’ water as punishment for flooding his cell and never turned it on or notified a supervisor of their actions.

“This order to shut off Mr. Thomas’ water was highly irregular and contrary to standard operating procedure in the jail,” said Benkley, adding that Thomas never received any liquids with his meals after the water was shut off.

Ultra-conservative Wisconsin Sheriff David Clarke has came out as a strong Trump supporter last year, determined to “do everything that I can” to help him win the presidency.

Brian Peterson, a Wisconsin medical examiner, said that Clarke tried to threaten him into keeping quiet about the four deaths that have occurred at the jail since April 2016.

“Nothing like this should ever happen in an American jail,” Erik J. Heipt, a lawyer representing the Thomas family, told the Huffington Post.