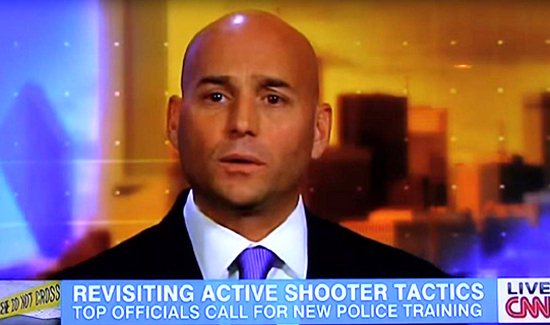 While most Americans were saluting and commending the heroic response of police officers in Orlando during the worst mass shooting in U.S. history, others have apparently decided to use the opportunity to grandstand.

“This was a catastrophic failure on police SWAT tactics,” says Chris Grollnek.

He used to be on a SWAT team in McKinney, Tx., for seven years but now runs a company training civilians and law enforcement to prevent and respond to active shooter incidents.

“This was not the right response… I totally disagree with the tactic of ‘wait-and-see’ because (it) only adds to the body count,” Grollnek said. “If you start shooting inside, every protocol across America is to make entry immediately.”

It’s always amazing how some people find a way to use tragedies to promote themselves or their companies.

“Someone on duty was risk averse and that’s what’s going to make things worse,” Grollneck went on to say.

Others say Grollneck’s criticism is only valid in “good guy with a gun” fantasy land.

Scott Reitz—who served 30 years on the Los Angeles Police Department, where he also did 10 years on their SWAT team—said high incidents like this are never as cut and dry as critics like to suggest after the fact.

“If we pull up and shots are being fired, we’re going straight into it. If we pull up and no shots are being fired, we’re obligated to establish communication.” he said. “If you simply go straight in and now you cause him to open fire and kill hostages, can you imagine the backlash? It’s a real hard tactical situation… Sounds to me that they responded appropriately.”

Hopefully, the training’s better than the spelling.