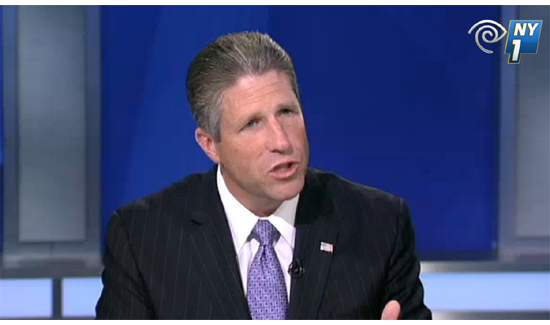 Via the NY Daily News:

More NYPD cops are putting in their papers and retiring early according to the city’s largest police union.

The number of resignations has increased each year since 2011 when 169 cops turned in their shields. That number nearly tripled last year.

Patrick Lynch, the PBA president, said the Pension Fund report confirms his fears that the agency has a problem.

“Eight out of 10 PBA members said in a survey that they would leave the job if they could,” Lynch said. “The latest resignation numbers are proof that many are doing just that, often to take a better-paying law enforcement job here in the New York City area.”

Lynch is making the case that New York City cannot afford to allow all of this talent, experience and investment in training walk out the door and he is demanding that the city provide its officers with better pay, benefits and working conditions.

The NYPD has long accused other law enforcement agencies — particularly the Nassau County and Suffolk County police departments — of poaching their officers right after they graduate from the Police Academy.

The starting salary for an NYPD cop is $41,975, officials said. While starting salaries in Nassau and Suffolk are about the same or less, the two Long Island police forces have massive wage increases in which cops can earn over $100,000 within 10 years.

Last week, the New York City filed civil suits against both the Nassau and Suffolk police departments, demanding more than $1 million in compensation for training 31 officers who left for Long Island within two years of joining the NYPD in 2014 and 2015.

New York State law allows police departments to seek compensation for training if a cop leaves for another law enforcement agency within their first three years.