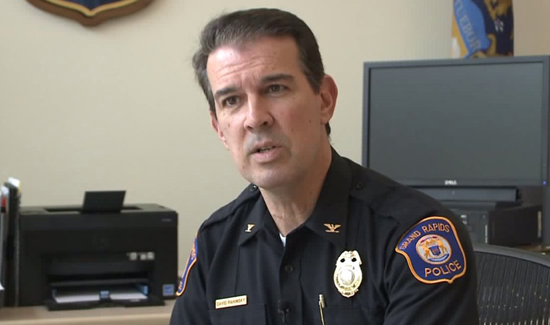 Officials say the boys were stopped while walking home after playing basketball at the Kroc Center. The boys reportedly matched a suspect description of someone seen possibly carrying a gun following a fight.

The boys were ordered to get on the ground and were detained, but ultimately it was found they were not armed. The boys were later released to their parents with a full explanation of what happened.

On Tuesday during a city commission meeting, Police Chief David Rahinksy (above) issued an apology but said ultimately, protocol was followed.

“I apologized to the young men and their families with a sincere apology and an explanation that the officers involved were following up on information in our ongoing efforts to keep everyone in this community safe,” said Chief Rahinsky. “The officers conducted themselves in a professional manner that resulted in a safe outcome for all.”

Several residents, including parents of the boys, also spoke out at the meeting, calling for changes to police policies.

“This has affected my boys tremendously, where they can’t even play basketball comfortable outside of their own home. I’m calm, but I’m very angry,” said one of the boys’ fathers.

On Wednesday, the two unions said there is no need for any policy changes within the Grand Rapids Police Department at this time.