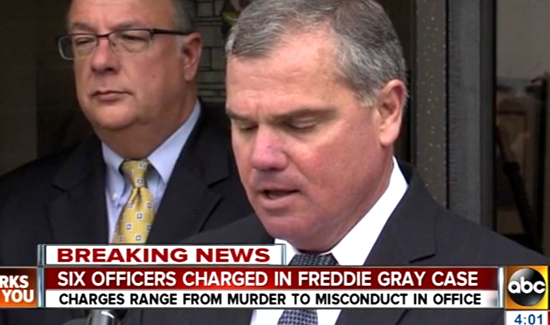 The DOJ just released a rather critical report on the Baltimore Police Department.

Essentially, the report says there are some serious problems with patterns and practices in Baltimore and that changes should be made to avoid more controversies surrounding rough rides and the like.

Needless to say, this is when you hope your local police union leadership is on the ball and ready with some counter-messaging.

Fraternal Order of Police Lodge 3 President Gene Ryan is not taking the DOJ reprt lying down.

It’s a three-step process. There’s a national controversy, the subsequent DOJ or blue ribbon panel “report” and then the standard “you don’t know what you’re talking about,” response.

Did anyone expect the DOJ to come back and say, “We don’t see a problem here.” Sheesh! The situation is so completely out of control with the DOJ going after law enforcement at every opportunity but failing to indict someone like Clinton when her behavior is so egregious! The entire situation simply screams corruption and Obamanation influencing DOJ! My confidence in the justice system in this nation is at an all time low and I have no trust of the DOJ or any agency under its umbrella.