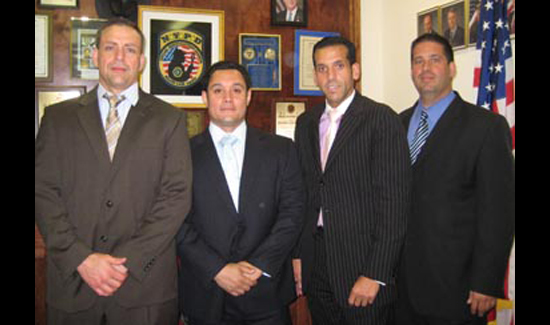 Ed. Note: Veteran Tony Diaz speaks out on police corruption, line of duty deaths, and law enforcement’s special obligation to protect the poor. Every law enforcement agency has experienced the tragic fallout that occurs when one of their officers cannot resist the many temptations the job offers; opportunities that are as numerous as they are lucrative. It can be as simple as accepting a bribe to look the other way when the law is being broken, or as bad as flipping over to the bad side and becoming a criminal. Whatever form the bad deed takes, it most always involves the lure of money.

The following is an excerpt from the pages of Brave Hearts: Extraordinary Stories of Pride, Pain and Courage by American Police Beat publisher Cynthia Brown.

There are almost a million law enforcement officers in the United States. The percentage who disgrace their badge and dishonor their oath is very small. But police officers breaking the law sell newspapers and the media is drawn to these stories like flies to honey. In New York the number of officers exploiting their position to do something illegal is less than one percent—a remarkably low number when one considers the many opportunities that abound in our nation’s largest city. But if you read the newspaper or watch the local TV news, you could easily believe the entire force is riddled with corruption.

Tony Diaz, a detective with the NYPD’s Major Case Squad, has been on the job for twenty-four years. He says it seems like the big scandals go in cycles. He was assigned to the 30th Precinct in the early 1990’s when scores of cops were charged with a variety of crimes including extortion, bribery, narcotics, tax evasion, and perjury and brought out of the precinct in handcuffs. That, he says, was a profoundly depressing time.

Tony explains the temptations for cops in New York City to accept a bribe or do something illegal can be too much for some. “You have to be very well grounded to do this job. You have to be humble and realize that people who are much smarter than you have tried to do things they shouldn’t have and got caught. I tell the younger kids just starting out, when an opportunity you know is illegal or ethically wrong presents itself, you’d better forget about it. The shame and embarrassment you will bring to you and your family is not worth it. And once your integrity is compromised, you are no better than the criminals you arrest.”

“Some people get the idea that everyone in a high crime neighborhood is bad,” Tony Diaz says, “but that’s just not true. In the worst neighborhoods, you find the nicest people. As cops, you deal with the worst five percent of the population. Most of them don’t work. They survive by ripping off all their neighbors, decent people who are working hard to survive.

“When I worked midnights in Harlem, I’d see these security guards coming home at four in the morning. These are the people who become victims. Would anyone choose to work twelve hours a day for five dollars an hour? I doubt it. But they’re doing the best they can. They’re poor. They have no choice where they live, but it’s their life and they make the best of it. Any cop in New York can tell you about a shopkeeper or some elderly person in the neighborhood who wants to help us. They’ve been there twenty or thirty years. Maybe they own a dry cleaners, or some other small business like a grocery store. I’ve always felt these are the people the police have a special obligation to protect.

“I’ll never forget one woman. It was in the 30th Precinct. I was on surveillance on the roof of her apartment building for months. One day I was on my way up and I met her in the hall. She asked me if I wanted to come in and have a glass of water.”

Once Tony was inside her apartment, he could see the view was much better from her living room window than the roof. “I took a chance and asked her if she would mind if I sat in her window. She never hesitated. She seemed to understand how hard we were working to get these dirt bags who were selling drugs and guns out of her neighborhood.”

The woman seemed relieved, even happy to have Tony’s company. She watched her soap operas and knitted as Tony sat in the window with his police radio watching for drug dealers. When it was cold, she made him cocoa. While he could only hear the voices, he found himself getting caught up in a couple of the soaps just from listening to the dialogue.

Three or four months after Tony met her, she died suddenly. Before he heard the news, when he went to knock on her door to conduct his regular surveillance, the entrance to her apartment was all taped up with a sign that read, “Do Not Enter.”

Tony has been busting bad guys close to twenty five years and so far has escaped the injuries that have plagued many of his colleagues. While some cops like Tony are lucky and manage to avoid the injuries and physical pain that often come with a career in law enforcement, there is no way to avoid the emotional distress that’s an integral part of police work. One of the most traumatic things that can happen is to be on the scene when a fellow officer gets shot, something that has happened to Tony twice.

In January 1993, three men robbed a supermarket in Washington Heights. Tony and his partner were a block away responding to another call for a possible dead body. When they arrived at the scene, there was no doubt in either officer’s mind that it was a homicide. The man had been repeatedly stabbed in the chest. They were just about to call it in on their radios when frantic voices cut them off. “It was crazy,” Tony said. “Everyone was yelling at once. We heard, ‘Shots fired. Cop down. Cop’s been hit. Ten-thirteen.’ Then we heard the location. We were just one block away.”

Tony and his partner responded. “As we pulled up, we saw one of the suspects running down the street. We chased him into the basement of a building and arrested him at gun point.”

They learned later that after the three men robbed the market, they ran out to the street and jumped into a livery cab. There was a police officer in uniform across the street at a bank. When he heard the commotion, he ran towards the cab and was met with a barrage of gunfire. One round hit him in the upper part of his leg one inch from his genitals.

The officer managed to return fire before he collapsed on the sidewalk. Everyone on the scene thought he was dead, but after a few seconds he stood up and fired off three more rounds. The three men jumped out of the cab and ran.

Tony still remembers the blood. “When we got to the hospital, detectives from the Crime Scene Unit were taking away the officer’s clothes. They were soaked. It’s hard to describe your feelings when you see something like that. It hits you pretty hard that it could have been you bleeding to death.”

On March 10, 1996, it happened again. Four cops and a sergeant from the 30th Precinct were up on 164th Street looking for a car that had been used in an armed robbery. Just as they began to follow a car that fit the description, a large crowd of people flagged them down and pointed to a man waving a large black gun. When the cops ordered the man to drop his weapon, he ran. They chased him. At some point during the foot pursuit, the man with the gun turned around, faced the officers and began firing. Then a barrage of gunfire, which seemed to be coming from the crowd, came at the officers from the other direction. They were being shot at from the front and the back.

Tony and his partner, Santos Gonzalez, were in their car when they heard the shots. “We saw this guy with a gun running towards us. We decided to shoot him before he shot us.”

But the rounds didn’t find their mark forcing Tony and his partner to run after the man with the gun. The street was covered with black ice and Tony went flying on the icy sidewalk and crashed down on his knees. Gonzalez was trying to reload with his speed loader when he too slipped on the ice. Realizing Gonzalez was not only down but out of ammunition as well, the suspect aimed his gun and ran towards him. Diaz was still down on the sidewalk but somehow managed to fire off a few more rounds, one of which hit the target. The man ran one more block before falling face down on the sidewalk.

If you ask Tony if there was one incident that has had a lasting impact, he says it was the funeral service for Michael Buczek and Christopher Hoban. “They were both killed in the line of duty in separate incidents in upper Manhattan on October 18, 1988,” Tony remembered. “They died within three hours and three miles of each other.

“Chris Hoban was twenty six. He was assigned to Manhattan North Narcotics. He was making an undercover drug buy when the dealers demanded he use some of the cocaine they were selling him. When he refused, they shot and killed him.

“Mike Buczek was a rookie. He was only twenty four and I think he’d only been married a few months. He was shot in Washington Heights by three drug suspects a little before ten in the evening. Mike and his partner had responded to a call on West 161st in the 34th Precinct. After completing the assignment, the officers noticed some suspicious looking men loitering near the building. When the cops went over the question them, they ran. As the officers followed them, one of the suspects pulled out a gun and shot Mike Buczek in the chest. He died a short time later.

“They had a joint funeral for them in this huge cathedral in Brooklyn. There was the largest motorcade I ever saw in my life. Thousands of law enforcement officers, police cars, and motorcycles were there. Someone told me that every city and town in New Jersey sent police officers to show their respect. When I saw this outpouring I started to cry. I couldn’t control it. I had been on the job for a year and kept thinking about my parents, especially my mother. I knew what it would do to her if I were the person they were burying that day.”