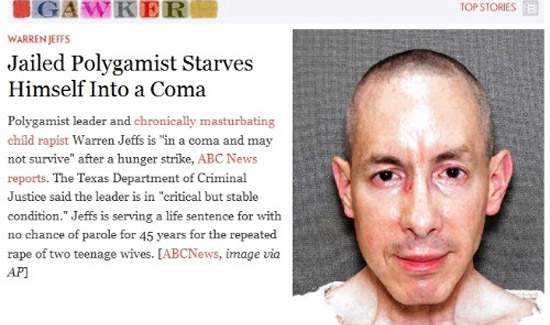 There’s been a lot of talk over the past few days about the wildly controversial and economically damaging religious freedom law passed in Indiana. Now, it looks like Arkansas could be going the same route.

Supporters of the legislation that allows individuals and organizations to refuse service to people who do not conform to their religious ideals say it’s not about discrimination, it’s about religious liberty.

NASCAR, Wal-Mart, and others disagree and have said they’re not going to do business in states that’s legalize discrimination on religious grounds.

For instance, there are some communities in the United States that consider their religious leaders the only lawful authority.

A former police chief who served the twin towns that the Fundamentalist Church of Latter-Day Saints controls entirely is coming forward for the first time, claiming he lived in fear that former FCLDS president Warren Jeffs (currently serving a life sentence for polygamy and child rape) and other church leaders would take his family away if he didn’t do their bidding.

Whether or not this kind of thing will now be commonplace in Indiana and Arkansas remains to be seen.

It’s always a real mess when people decide the architects of our constitutional democracy had that separation of church and state thing all wrong.