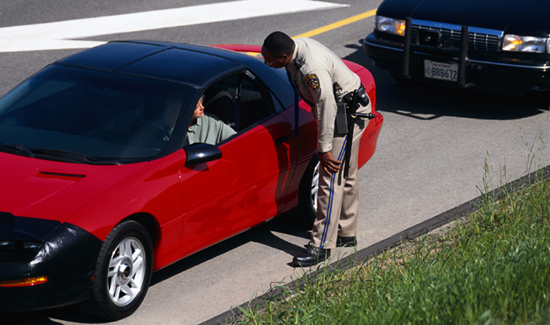 Let’s say you’re driving down the highway and a state trooper lights you up. You look for a safe place to pull over and start getting your license and proof of insurance ready. The trooper approaches your vehicle and says something like the following:

“Good afternoon ma’am. The reason I stopped you today was because you made a lane change without signaling. I need to see your license and registration please. Oh, by the way, did you know that Allah is the one true God and you could be killed for worshipping a false idol?”

Needless to say the trooper would be fired, sued and “exhibit A” when FOX News makes the case that ISIS has indeed infiltrated the ranks of US law enforcement.

Obviously that didn’t happen. But something similar did and it’s got a lot of people talking.

According to a report from WLWT News in Indiana, a woman is suing a state trooper over a Union County traffic stop that may have been a pretext for religious conversion.

The suit alleges that one Ellen Bogan was stopped on U.S. 27 by Trooper Brian Hamilton last August. 9.

Hamilton told Bogan she passed another motorist illegally and he gave her a warning ticket for speeding, the lawsuit states.

Then the trooper crossed a dangerous line. He asked the woman “if she had accepted Jesus Christ as her savior.”

Making matters worse, Trooper Hamilton’s police lights were on during the whole exchange.

Bogan says she didn’t feel she could drive away or refuse to answer Hamilton’s questions as he was a police officer and she wanted to comply.

State Police spokesman David Bursten told the Indianapolis Star that the department knows about the lawsuit but would not comment on pending litigation. He did add that there isn’t a specific policy that deals with officers who distribute religious materials in the course of their official duties.

And some don’t see what the fuss is about.

The Indy Star reported that Micah Clark, executive director of the American Family Association of Indiana, had a different take on the matter. While agreeing that the traffic stop might not have been the best time to win souls for Christ, he was confused about whether a police officer should lose his right to free speech because he is wearing a badge.

“(This case) might not be the most persuasive time to talk to someone about their faith, but I don’t think that a police officer is prohibited from doing something like that,” Clark said.

If he’s right about that, all police officers who are Muslims, Jews, Sihks, Buddhists and Satanists can rest easy knowing that they’re free to attempt to convert anyone they come in contact with in uniform and on-duty to their preferred religion.

While I dont agree with religion being invloved at work, your example are abit extreme. The muslim included a death threat and the tropper included panflets. Think about that.

This is wrong, this officer’s job description does NOT include trying to get others to join his cult, which in this case, is Christianity. He is paid to do his job, end of story. Let him preach on his own time.