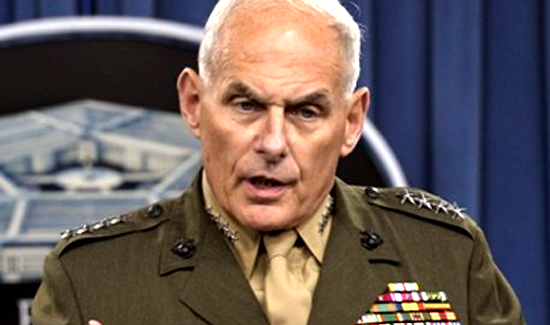 As President Trump’s DHS Secretary, John “Mad Dog” Kelly (above) is a high-profile member of the new administration where previous DHS secretaries weren’t quite as well known. Here are few quotes from Sec. Kelly that can give people a window into the way Kelly thinks about things.

On reading media reports about DHS and so-called “fake news”:

“I make my way up the Beltway every day, and I use that hour or so to read the news clips about DHS. It’s one of the first two things I do every day—the other is the daily intelligence briefing. In one, I read what other people are saying about me—and more important, what they’re saying about my people. In the other, I learn about what’s really going on. There’s a big gap between the two.”

On perceived enemies and critics:

“While some members of Congress, or state and local politicians, or a member of an advocacy group read or listen to a partial or inaccurate media report on some alleged event at an airport, in a courthouse, or at a border crossing and assume the men and women or DHS are intentionally abusing innocent individuals while breaking or ignoring U.S. law or court orders—instead of assuming as they should that the men and women of DHS are carrying out their assigned mission in accordance with the law.”

On protecting the public and DHS getting no credit:

“The professionals at DHS are protecting the homeland and in many cases putting their lives on the line for a population the vast majority of whom will never know they are protected by such dedicated and well trained public servants. And that’s an ordinary day, one that doesn’t make the papers.”

On what to be frightened of:

On DHS, drug enforcement and the “war on drugs”:

“Let me be clear about marijuana. It is a potentially dangerous gateway drug that frequently leads to the use of harder drugs. Additionally, science tells us that it is not only psychologically addictive but can also have profound negative impact on the still developing brains of teens and up through the early 20s. Beyond that, however, its use and possession is against federal law and until the law is changed by the U.S. Congress we in DHS are sworn to uphold all the laws on the books.”

On the dangers of the internet:

“Homegrown terrorism is notoriously difficult to predict and control. And what’s feeding this homegrown violence? Most experts agree a major contributor is the internet.”

On laptops and air travel:

“Recently, based on intelligence, I banned electronics bigger than a cell phone on some commercial flights,” he said. “This program will likely expand given the sophisticated threats aviation faces… That ban, and the intelligence that drove it, demonstrates that commercial aviation continues to be a prime target for terrorists

“We’re working with our nation’s most critical businesses to build in resilience to our digital and physical infrastructure. This helps ensure criminals and other bad actors—including Mother Nature—can’t disrupt the systems and networks that drive our American way of life.”

On the idea that legislators should just shut up:

“If lawmakers do not like the laws they’ve passed and we are charged to enforce, then they should have the courage and skill to change the laws. Otherwise they should shut up and support the men and women on the front lines.”

On apologies if someone makes a mistake:

“We will never apologize for enforcing and upholding the law.”