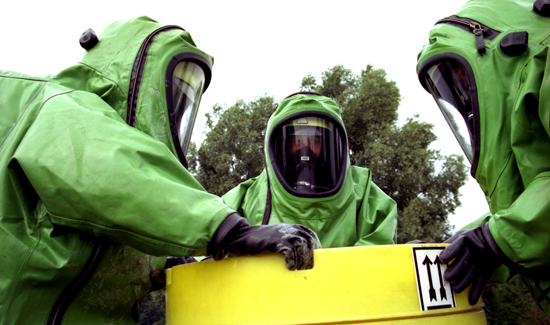 According to CBS Minnesota, local law enforcement community is actively taking steps to protect citizens there from the Ebola virus.

One of those steps is a bag with some eye and mouth protection.

Minneapolis police squad cars, bikes and Segway’s are now being equipped with the bags.

“We get to the scene first. We want to make sure that we have this stuff with us just in case we encounter someone we may think could be infected,” he said.

Despite the hysteria outbreak over the possibility of an Ebola outbreak, most officers know the risk of contracting the virus is extremely low.

But they say the eye protection and face masks from the Department of Health will better protect them from all communicable diseases, at a time when Ebola is top of mind.

It was unclear from the local media report whether officers were being equipped with actual hazmat gear with respirators or the more conventional dust-masks commonly used in the construction trades.

The Ebola scare has even changed the way that inmates enter the Hennepin County Jail each day.

“We want to contain it on the front end in the most secure environment we can,” Hennepin County Sheriff Rich Stanek said. That containment strategy includes a health questionare for new inmates.

“They will be general questions such as ‘When did you last travel?’ ‘Have you traveled to a West African nation as of recent?’ Do you have any flu, fever, cough, vomiting?’” Stanek said.

If an incoming inmate says “yes,” to one of the questions, a prison doctor or nurse will be called in to check for signs of infection.

“Adding that extra layer of safety and security is the right thing to do at this time,” Stanek said.

Hennepin County deputies will also all get protective clothing. That should happen in a matter of a few weeks.