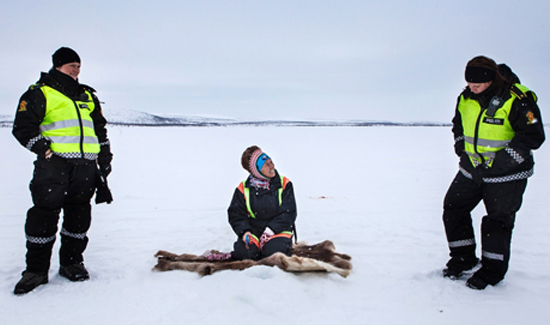 Gianmarco Maraviglia spent one week last spring with the reindeer police, a branch of the Norwegian Police Service that monitors reindeer herding in Finnmark and Troms. The two counties cover some 27,000 square miles of remote forest in the country’s rugged northwest corner. “The idea that they have an entire police corps dedicated to protecting nature was very interesting to me,” he says.

Maraviglia, who lives in Milan, learned about the reindeer police in 2015 while reading Forty Days Without Shadow: An Arctic Thriller, a murder mystery set in the village of Kautokeino. He immediately wanted to photograph them, and got the opportunity in April while assignment for Vanity Fair Italy and Marie Claire France. Maraviglia joined two policewomen for a week, zipping across the tundra on snowmobiles and checking in on anyone they met along the way.

Reindeer police work in pairs during week-long shifts, following reindeer tracks wherever they might lead. The officers spend the night in small cabins dotting the countryside, and most often come across the Sami, indigenous people who depend upon the reindeer for survival.

The officers settle disputes among herders, assist families moving their reindeer from one island to another, and generally help out in whatever way they can. They also check fishing permit and write the occasional citation to speeding snowmobilers.

Maraviglia found himself mesmerized by the vast, barren landscape. “It was breathtaking,” he says. “The impression was the same as in the desert, but white.” Although beautiful, he found the conditions challenging. More than once he hopped off the snowmobile only to find himself neck-deep in snow.