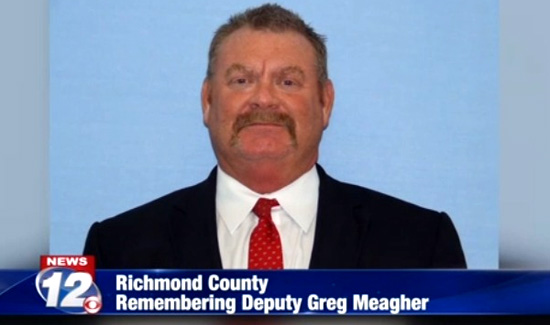 Via The Augusta Chronicle:

On Tuesday, a flag flew at half mast at the Richmond County Sheriff’s Office and everyone seemed a little quieter than normal. A thick black and thin blue line across their badges was a constant reminder that they were missing one of their fellow officers.

Remembrances of Sgt. Greg Meagher continued Tuesday, two days after the 33-year veteran of the department died Sunday after responding to a call at Xytex, a sperm bank on Emmett Street. He was overcome by a heavy chemical cloud from leaking liquid hydrogen in a tank as he tried to rescue an employee, Anita Wylds, who had entered the building to attempt turning off a valve.

Wylds is in critical condition at Doctors Hospital.

“He tried to save her life with no regard for his own,” said Marshal Ramone Lamkin, who was a past supervisor of Meagher at the sheriff’s office. “He truly was a hero.”

Outside of the sheriff’s office’s north substation in Daniel Village, Meagher’s car was backed into the “sgt. on duty” spot. Visitors and other officers treated it as a memorial. Its hood was covered in bouquets of flowers as well as letters, balloons, an Irish flag, a black wreath and a Paw Patrol stuffed animal. An American flag flew overhead.

Younger deputies especially looked up to Meagher and that wasn’t just because of his height, Sheriff Richard Roundtree said. Everyone brought up Meagher’s size, though. It’s one of the reasons for his nickname “Big Red.”

To the senior narcotics investigators during his time in that division he was “Mother Goose,” which came from his tendency to take younger officers under his wing. Lt. Allan Rollins said he did that job naturally and was always protective of his people.

Shawn Hargis-Rhodes estimates she’s known Meagher for about 20 years. Hargis-Rhodes, a senior code enforcement officer for the city’s Planning and Development office, said their jobs often brought them together and they soon became friends. In the sometimes stressful and emotional assignments they worked on, she said he was always a comfort to her and to anyone who needed a little of his strength.

“To be so big, he was so compassionate,” Hargis-Rhodes said. “It’s just not something you find very often.”

In 2004, Meagher was shot in the face while assisting federal agents in a drug sting in Burke County. The bullet entered his jaw and exited the back of his neck. After recovering he returned to work, jumping right back into narcotics, one of law enforcement’s most dangerous assignments.

Rollins said he was better than anyone he’s met at finding good in something bad. Roundtree said he never let the shooting affect him. He also never talked about it or tried to make it into a “party story.”

“He was more angry he got shot than hurt (by the bullet),” Roundtree said.

They both became officers close to the same time, about six years apart, Roundtree believes. They were on the SWAT team together, trained together and partied together. Meagher was the life of any party, he added.

“He was a complete hoot,” Hargis-Rhodes said of Meagher’s personality.

He was also very proud of his Irish heritage and took every opportunity to dress in his kilt. Meagher attended every Irish festival he could in the Augusta area and often traveled to Savannah for them. Rollins said he was a typical Irishman. He was well over 6-feet-tall with bright red hair, and a red beard with a gray streak when he grew it out. He also loved beer and Irish music.

“He would always try to get me to listen to his Irish music,” Rollins said. “… He loved it and he loved it loud.”