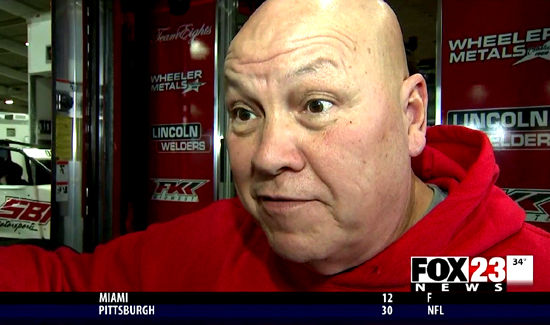 TULSA, Oklahoma – News On 6 obtained an audio recording of a phone call made by Rogers County Sheriff Scott Walton (pictured above) in which he curses at a Tulsa Police officer and calls him a coward.

Sheriff Walton says he was standing up for his deputy and he wouldn’t change a thing.

Tulsa Police Officer Craig Heatherly says he was pulling over a possible *suspect’s car in East Tulsa a few weeks ago. He knew he needed back up, so he flagged down a Rogers County deputy’s car for help. But Heatherly says it just drove past.

He went home and made a post on Facebook, something like: “Thanks to the Rogers County deputy that drove by me today without helping… while I was on a felony car stop by myself.”

“I think our agency took a lick on this, I don’t know of anybody with a gun and badge that would drive by another officer that needed help like this.” Sheriff Walton said.

He later called Heatherly himself, telling him to apologize to the Rogers County deputy. Heatherly’s wife recorded part of the call.

Sheriff Scott Walton/Rogers County: “You owe the man an apology.”
Officer Craig Heatherly/Tulsa Police: “Um, I think we’ll have to agree to disagree on that one.”
Sheriff Scott Walton/Rogers County: “Mmkay. Well, here’s what to do: agree on this. Alright, quote me on this, you know, any – you handled this in a (expletive) cowardly way, okay? So therefore, I think you’re a (expletive) coward. So remember that, and we’ll agree to disagree. But I do agree that you’re a (expletive) coward, okay?”
Officer Craig Heatherly/Tulsa Police: “Alright, thank you, Sheriff.”