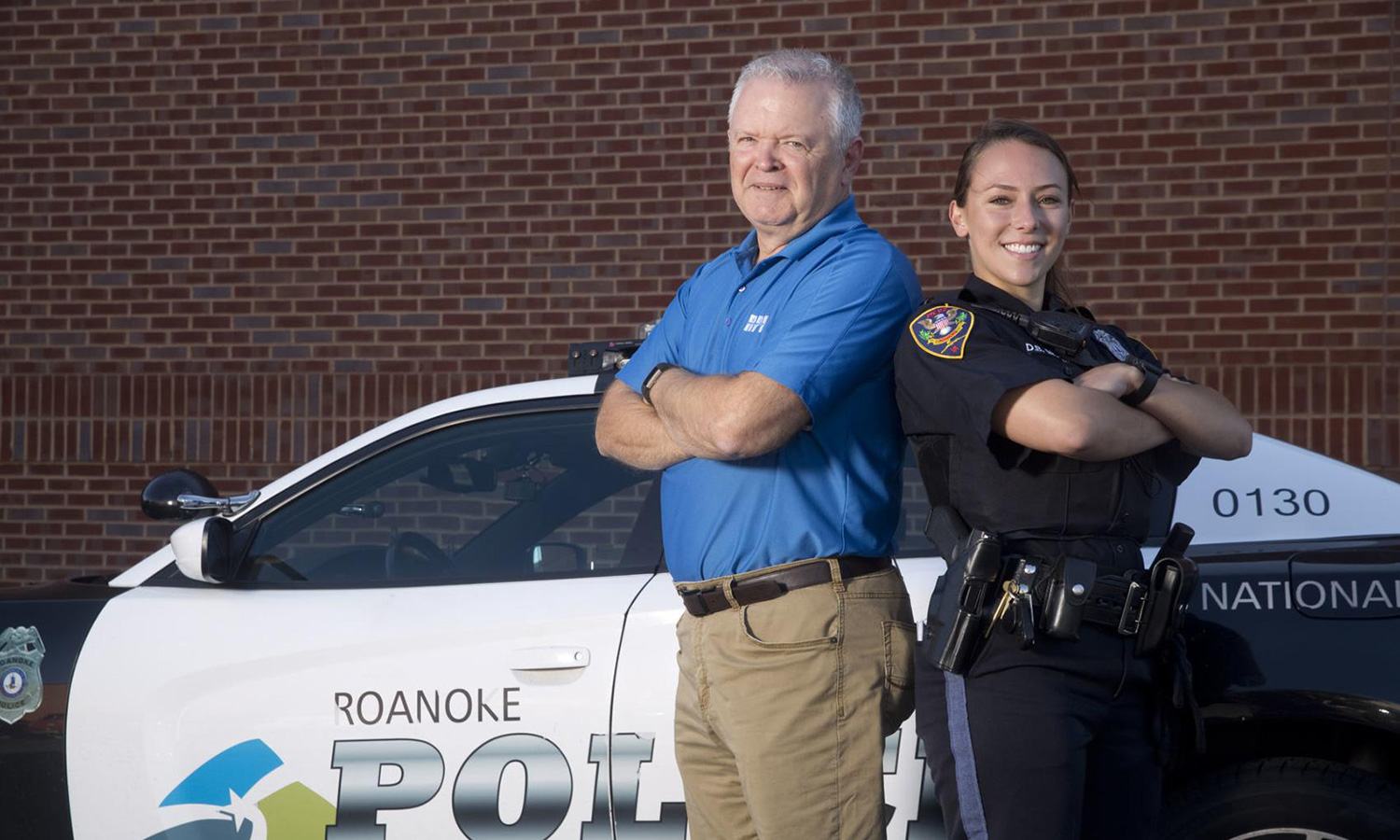 One May day, the call came out over the radio.

A man was hanging from the east side of an Interstate 581 overpass, dangling a dozen feet above morning rush-hour traffic on Orange Avenue. Possible suicidal subject.

Officer Devin Moore was sitting in her patrol car at Washington Park catching up on paperwork.

Moore pulled her cruiser around to Orange, on the west side of the bridge, to stop traffic. Officer Vincent Haddox, who had called for more officers, sent out a new directive: We need someone on the bridge. Now.

Moore, a 22-year-old who graduated from the police academy in December, scurried up the grassy knoll in the highway’s cloverleaf. She sprinted across three lanes of traffic and jumped over the median. “I didn’t really have a plan,” she admitted later.

As Moore ran across the next three lanes of traffic, she saw only the back of the man’s head and his arms locked on the concrete barrier. He was stuck, unable to pull himself up.

Then Moore looked to her right and saw a policeman approaching — but not a patrol officer. It was Chief Tim Jones.

Jones looked to the man’s left and she understood to walk carefully to that side. Without exchanging words, the two locked their arms beneath the man’s. Moore, the second-youngest patrol officer, and the chief, who joined the department in 1981, clung on to him until other officers arrived and helped pull him up.

Earlier this month, Moore, Jones and the other officers involved in the rescue — Haddox, Officer David Lyle and Sgt. Gayle Combs — were recognized by the Roanoke City Council for their efforts in the May 9 rescue.

A few minutes before Moore ran up the hill, Jones had been sitting at a red light near Hotel Roanoke and heard the call.

“I said, ‘Man I’m right here at it,’ ” he recalled later. Jones drove up the ramp onto I-581 and put on his hazards. Another motorist, Jones said, helped slow down traffic as the chief stepped out of his vehicle and went to the edge of the overpass.

“I was just fortunate enough to be part of that team. And it was a team response,” Jones said at the council meeting. “Kind of the interesting dynamic is Officer Moore is one of our youngest officers. I’m one of our oldest.” Moore, standing next to him, smiled.

“That training continues from one decade to the next,” Jones said.

“The image that the chief portrayed of those interlocking arms will stay with me for a while,” Vice Mayor Joe Cobb said. “And the intergenerational locking of arms and the ability to bring someone out of a very vulnerable situation, placing yourselves in a vulnerable situation, and raising them up is powerful.

“It’s a powerful image for our city.”

“You know it’s not very often that we recognize our female, our lady officers,” Price said. (Women made up one-sixth of the department’s sworn officers in 2018.)

“So let me just say on behalf of all our females here how extremely proud we are to be able to recognize one of our own.”

Moore said later that the commendation and press attention was “a little overwhelming, because I feel like I didn’t do anything too special.” She emphasized the teamwork aspect of the rescue. She mentioned that calls for people in apparent mental health crises are common, if not as publicly visible as the May rescue.

“Honestly, we get a lot of calls like this but people don’t really know about it.”

Moore grew up in Pearisburg in Giles County and studied sociology and criminology at Virginia Tech. She didn’t know what she would do after graduation. At a job fair, she talked with a lieutenant at the Roanoke Police Department who told her about an internship. She was required to intern 120 hours and ended up doing 210.

“I had never considered police work before or law enforcement at all, but I really enjoyed seeing everything they did,” she said during an interview in December, a day before the department’s academy graduation.

After the bridge rescue, Moore headed to the courthouse for appointments, her adrenaline still rushing. She acknowledged it was “kind of unsettling” not knowing what later happened with the man on the bridge. (A police spokeswoman said the department doesn’t have information about his condition and wouldn’t be releasing his name.)

“It’s just part of the job,” Moore said, “just to do what you can then, and go onto the next call and help the next person.”