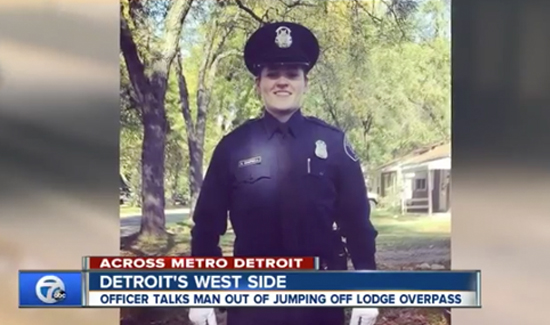 A rookie officer in the Detroit Police Department is being hailed as a hero for saving a man’s life recently.

The incident happened early Saturday morning near Livernois and the Lodge overpass on the city’s west side.

Police say a distraught man in his fifties was threatening to jump off the bridge. That’s when Officer Abigail Campbell (pictured above) intervened and was able to talk the man out of harming himself.

Detroit Police Chief James Craig praised the officer’s actions, saying “For her to take the initiative to start engaging him, an individual who was obviously distraught, and through that conversation, she was able to save his life.”

Officer Campbell has only been in the field for four short months. Chief Craig says he plans to present her with a “Chief’s Citation” as a reward for her heroic efforts.