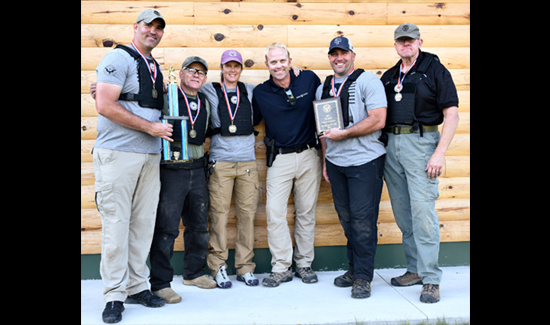 Participants immersed themselves in two days of educational workshops and exercises focused on strategic training and advancing modern-day skills. Among the featured activities were debriefs on major LE incidents presented by law enforcement leaders and certified trainers, live fire skills challenges, and an equipment showcase featuring the latest innovative tools and technologies for LE.

“I loved the quality of speakers—they lived what the training courses entailed,” said one participant. “The prizes were great and I loved how Armor Express CEO Matt Davis tested his product by shooting himself in the chest. I was sold right then.”

Another attendee said, “Speakers were top notch and the shooting competition courses were some of the best I’ve ever attended.”

At the center of GLLEC 2017 were the dynamic individual and team challenges. Ben Sonstrom of the Michigan State Police took 1st place in the individual challenge and the Illinois Tactical Officers Association captured the 1st spot for the team challenge. The 2nd, 3rd and 4th runners-up in the individual category were Mark Deleeuw (Holland Dept. of Public Safety), Jeff Klein (Holland Dept. of Public Safety) and Jeremy Rozycki (Detroit Police Dept.), respectively.

In the team category, 2nd, 3rd and 4th runners-up were the Northern Michigan Mutual Aid Task Force Emergency Response Team and Will County. See more about participants and winners HERE.

Check out photos from the event HERE.

Interested in attending next year’s Great Lakes Law Enforcement Challenge? Visit www.gllec.com and sign up for e-mail notifications about next year’s Challenge. We hope to see you there!