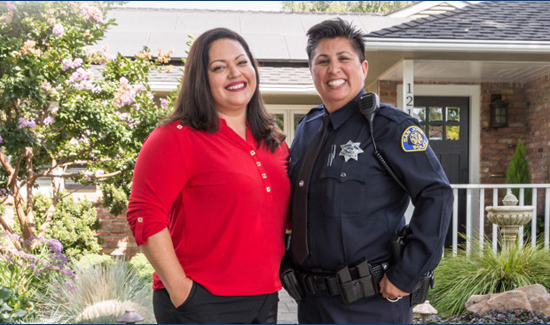 Via the San Jose Mercury News:

SAN JOSE — With Silicon Valley Pride approaching this weekend, the San Jose Police Department is for the first time launching a campaign to recruit members of the LGBT community through a series of public initiatives and an intrepid ad campaign.

The campaign will feature identical ads showing the actual families of three officers: a heterosexual couple, a gay male couple and a lesbian couple.

Chief Eddie Garcia also announced Thursday that his department has created a liaison role dedicated to addressing crime and police concerns within the LGBT community, which has battled issues with underreporting of crime out of fear of reprisal from families and colleagues.

“The reality is the LGBT community gets overlooked often,” Garcia said. “Bias isn’t solely about race. We can’t preach social justice outside the organization if we’re not preaching it inside as well. We want to continue to mirror the community we serve.”

Garcia will lead a push this weekend during Pride festivities to drum up interest in joining the police force. And inside the department within existing ranks, an array of projects to improve officers’ cultural competence with LGBT people and issues, and ability to discern hate crimes against them, is underway. Police academy recruits are already required to visit the Billy DeFrank LGBTQ Community Center as a component of their diversity training.

Officer James Gonzales, recently the vice president of the police union, is helping spearhead the new outreach. He is one of two openly gay male officers in the department.

“These steps are significant. No matter what you say, unless officers and people are seeing other officers serving openly, how will they have the confidence to do the same?” Gonzales said. “Seeing us in real same-sex couples can provide the confidence to work here and be open about their family status.”

“We’ve been at Pride for a number of years,” he added. “But we’ve never recruited at a gay event showing a gay officer and their family.”