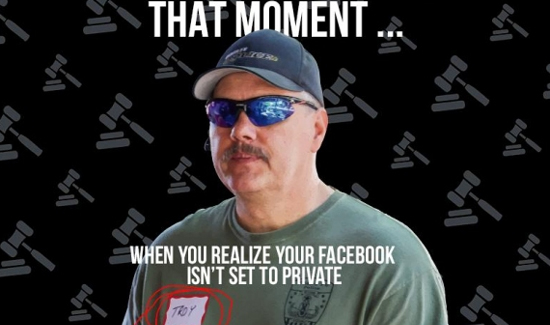 Via the Santa Fe Reporter:

The Santa Fe Police Department does not have a social media policy, but the department personnel code does prohibit “conduct unbecoming of an officer.”

When asked whether Baker’s posts reflect broader positions of the police department, Gallagher tells SFR, “Emphatically, no.” He adds: “Posts such as this have the potential to make officers’ jobs more difficult by eroding police-community relationships.”

Baker says personal views expressed on his Facebook post do not affect his on-duty behavior. “I’m not bringing it to work,” he tells SFR. “You find one person I am not giving appropriate community service to due to their gender, race or ethnicity. Find one.”

Baker briefly lost his job after a 2010 incident in which a man claimed he and four other officers used excessive force when arresting him for disorderly conduct in a Walmart parking lot. An external review board reinstated Baker and another officer, Steve Cosban. (We asked the police department for additional complaints filed against Baker. We’ll keep you updated with any responses.)

Baker, a 22-year veteran of Santa Fe city police, was elected president of the Santa Fe Police Officers Association about a year ago. The union represents roughly 150 sworn officers and civilian employees, according to Baker.

Not every one of Baker’s Facebook posts expresses his political views. For example, he routinely posts memorials for fallen officers. He also occasionally shares personal news, including a photograph of the trophy he received after the Santa Fe Police Department awarded him 2016 Supervisor of the Year.