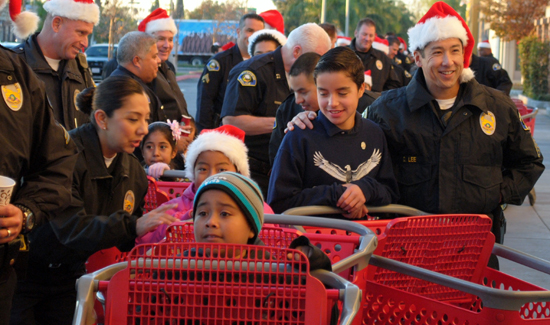 He and his shopping buddies, Henderson Police Officers Stu O’Nan and Josh Greener hunted through the boys department at Walmart until they found what the young man was looking for — a dress shirt, tie and slacks.

When The Gleaner asked him why he wanted dressier clothes, Michael said, “Well, cause almost every picture day I looked bad, and I want to look good.”

He said after getting to shop with his new friends in the police department, Michael said he feels a little different about Christmas this year than in the years past.

“Well the problem is we can’t mail our letters straight to Santa. Santa only reads them at our home and by then it’s too late, so I never get what I want.”

But this year, Michael said, he is getting what he wants thanks to the Cops and Kids program.

The Fraternal Order of Police Lodge No. 9 in Henderson sponsors the annual event which is designed to take children whose families are experiencing financial difficulties and provide them with a shopping trip in which they get warm clothing for the winter.

“He’s going to talk about this for the next week and a half,” said Michael’s mother, Erin. “He’ll be hanging out the windows, waving at every single cop, and I’ll be saying, ‘Sit down or they really are going to come and say hi.’ ”

Erin said she hopes if Michael takes away anything from his time with law enforcement, it’s “appreciation for the fact that they really are here to help.”

Officer Greener, who accompanied Michael, Erin and Officer O’Nan, was both watching and shopping as he admitted to being a novice Cops and Kids participant.

“This is my first year doing Cops and Kids,” he said. “I just want to help as much as I can. I want to help make these kids smile and give them some hope and good experiences with police officers. I think any time police are involved with these types of things it shows the younger generation that we’re here to help and not just to put people in jail.”

Henderson Police Chief Chip Stauffer said he was thrilled to see so many of the younger officers participating in this year’s Cops and Kids.

“It’s awesome,” he said. “I didn’t put anything out. They just decided to do this. It’s unbelievable to see all the young officers, some who have just gotten out of training, show up to do this.”