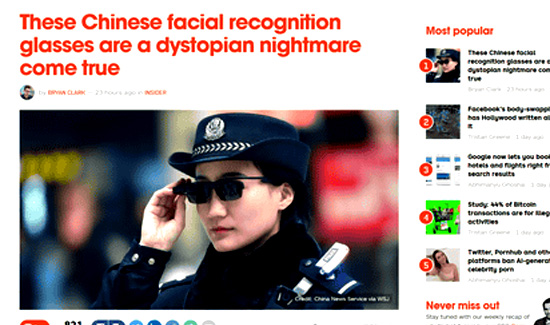 Private security, homeland security and pretty much anything branded “security” is big business these days.

In fact, there’s so much money to be made by privatizing public safety (thereby making it “security”) that the investment arm of the Central Intelligence Agency and major players from Silicon Valley are lining up for a share of the market.

Don’t miss the next issue of American Police Beat- we’ve got a great story about the rapid pace of police privatization in the UK. Jeff Bezos (Amazon CEO) is making some major moves that will have a major impact on the way people think about policing.

In the meantime, there are already strong indicators that the billionaire class thinks there’s serious money to be made automating and privatizing law enforcement. It turns out that CIA backed company with a ton of military contracts all over the globe has had a working relationship with the New Orleans Police Dept. to test and promote predictive policing products. Neither local lawmakers or the taxpayers were ever informed that this was happening.

What this means for police officers currently working at public safety agencies has two parts.

First- get ready for a lot more of the “do more with less” routine as municipalities take the money that would have gone to new radios and raises and earmark those funds for a tax break for the Tech company that gets the secret contract to spy on American citizens sans warrants. And secondly, cops are people too. They don’t get a pass from the corporate surveillance state for being police. Cops will be targeted by these systems just like civilians.

Here’s a look at where we’re headed.

But not to worry, a lot of very rich people are going to get a lot more rich in the tradeoff of privacy, liberty and freedom for the illusion of even more post 9-11 world security. It’s a great time to be a billionaire.