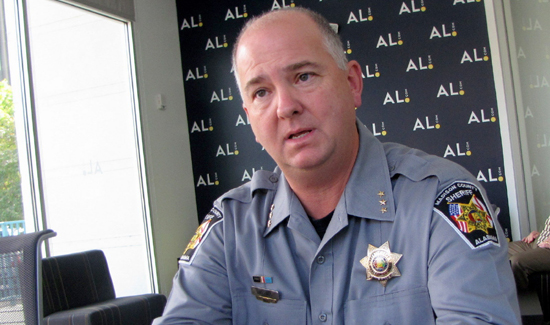 Madison County Sheriff Blake Dorning is urging citizens to oppose a bill introduced in the state legislature this month that he said would threaten the safety of law enforcement officers.

The bill, sponsored by Sen. Gerald Allen, R-Tuscaloosa, would repeal five handgun restrictions. Among those restrictions to be repealed are carrying a concealed weapon without a permit as well as the prohibition of carrying a weapon at an organized protest.

It’s those two aspects of the law with which Dorning took exception.

An open letter to citizens was posted on the Madison County sheriff’s website as well as the department’s Facebook page.

“My message today is to inform you of an impending Senate Bill in the Alabama Legislature directly threatening the safety for our Law Enforcement Officers and Deputy Sheriffs,” Dorning’s letter said. “It is a threat to law abiding citizens like you and me and a threat to this great state and country.”

Dorning said the pistol permit is a tool used by law enforcement to quickly screen subjects of an investigation. Pistol permits are issued after the applicant passed a criminal background investigation.

“The repeal of the current statute will allow everyone who was previously denied a lawful permit to now be able to conceal a handgun in their vehicle to drive or walk freely to attend church services, enter a movie theater, football stadium, business or other gatherings in our communities,” the letter said.

Dorning said that while he supports the right to protest, allowing participants to hide guns could endanger law enforcement.

“This is especially troublesome and dangerous for protests that espouse hatred,” the letter said. “Although protests are protected by the First Amendment, these gatherings will now be attended by persons possessing a handgun hidden from view of law enforcement. SB24 will allow these persons with a past history of violent behavior to do so.”