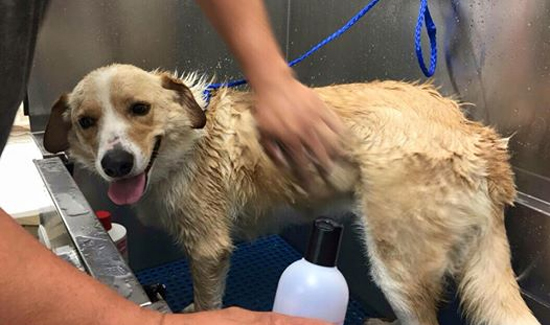 A dog that was found tied to a house during rising floodwaters in Texas has been adopted by one of the people who helped rescue her.

The 2-year-old border collie mix, named Archer, was found 30 miles southwest of Houston by Fort Bend County Sheriff Troy Nehls and a TV news crew from KPRC, the local NBC affiliate, which was traveling by boat and surveying the flooded neighborhood. At the time of Archer’s discovery, she was neck-deep in murky water.

In the rescue video above, which has received over 1.2 million views on Facebook, KPRC reporter Phil Archer, and volunteer Jeff Shimek jump into the water to rescue Archer.

“They chained him to the front of the [expletive] house?” one of the men is heard saying in the rescue video.