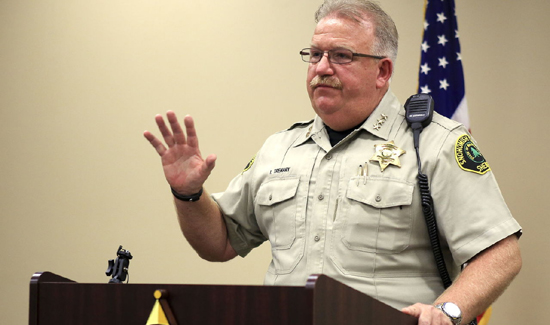 A new federal report calls out the Snohomish County Sheriff’s Department (WA) for its “non-cooperation” with President Donald Trump’s stepped-up efforts to round up and deport those in this country illegally.

And county Sheriff Ty Trenary (above) isn’t the least bit pleased by what seems a public shaming of law enforcement agencies that refuse U.S. Immigration and Customs Enforcement requests to detain individuals behind bars indefinitely without a warrant.

Monday’s report from the Department of Homeland Security is the first tally of which law enforcement agencies are ignoring its enforcement arm’s request for help. New reports are required weekly under Trump’s Jan. 25 executive order on enforcing the nation’s immigration laws.

Trenary’s response: “That is simply untrue.”

“This unsubstantiated claim is offensive to me and the communities that I and the men and women of the Snohomish County Sheriff’s Office proudly serve,” he said in a prepared statement. “If ICE truly felt that these offenders were a danger to society, they would establish probable cause and seek an arrest warrant, just like any other law enforcement agency.”

Immigration and Customs Enforcement issued 3,083 detainers in the U.S. from Jan. 28 through Feb. 3, the initial reporting period. Of those, 206 were declined, according to the analysis.

While the report acknowledges “the outcome of these specific detainers is yet to be determined” it nonetheless deemed Snohomish County to be one that does not comply “on a routine basis.”

It is unclear if the number for Snohomish County is accurate. The report lacked information allowing it to be independently verified Tuesday. Calls and emails to the Homeland Security media representatives did not get returned.

Accuracy is an issue. The New York Times reported Monday that the federal agency admitted Nassau County was erroneously included.