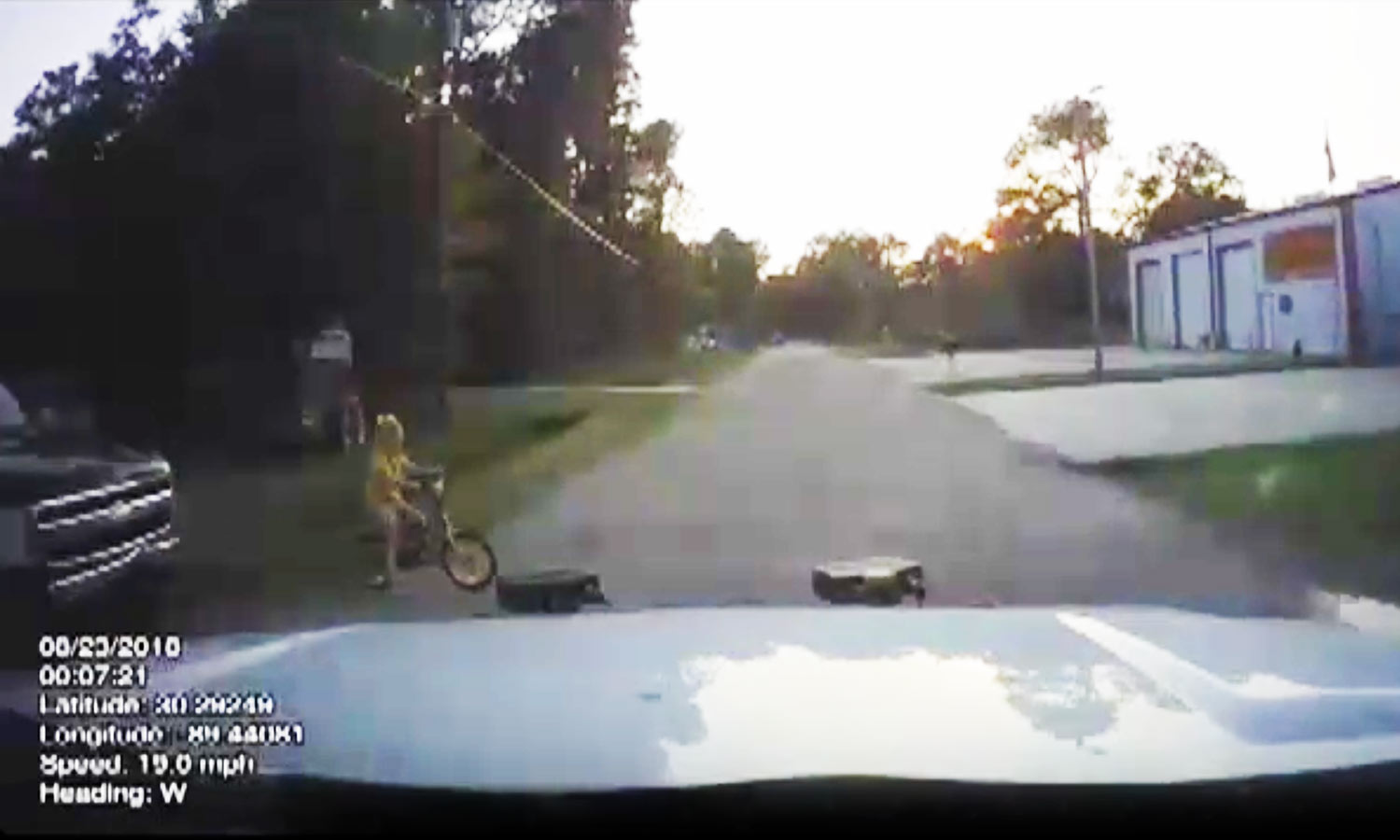 After much speculation on social media, Hancock County Sheriff Ricky Adam has released the video showing a deputy accidentally striking a child.

The sheriff said he decided to release the video after many inaccurate stories and false accusations flooded social media about the accident and the deputy involved.

The video shows the deputy driving between 17 to 19 miles per hour down a road in Bayside Park. Then, the 7-year-old on the bike is seen darting out from behind a parked truck. The sheriff says the deputy clipped the girl’s bike tire with his bumper.

Sheriff Adam said some people say the deputy didn’t report the accident for ten minutes. However, the sheriff reports that the car’s GPS system shows the accident happened at 7:07 p.m. and dispatch logs show the call was received at 7:08 p.m.

In a press release issued Friday morning, Sheriff Adam said he believes the false statements made about the accident were personal attacks against the deputy. That’s why he decided to release the video.

Here is the full statement issued by Sheriff Adam:

In light of multiple inaccurate statements made concerning the unfortunate events on August 22nd in a traffic accident occurring in Bayside Park, I feel compelled to release the video footage of the accident involving one of my deputies and a seven year old girl on her bicycle.

It is my opinion that once the public sees the video, it will be agreed by most that this accident was not only unavoidable by my deputy, but the statements made about speeding, leaving skid marks and having to be flagged down are utterly false.

The patrol unit that was involved in the accident is equipped with an in-car camera system. This camera system is wired into the vehicle’s computer system, which documents factors such as vehicle speed, brake use, use of turn signals and more. This system shows my deputy was traveling at a rate of 17 to 19 mph in a 25 mph speed zone at the time the child’s bike ran into the side of the patrol vehicle. In addition, there was no rapid application of breaks, which would cause skid marks. Finally, the vehicle came to rest approximately one car length from the injured child’s bicycle, obviously indicating that he stopped immediately upon the child coming into contact with his vehicle.

With the comments made that my deputy walked around for ten minutes before reporting the accident or requesting medical assistance are false. According to the GPS system associated with the in-car camera system, it shows that the collision occurred at approximately 7:07 p.m. A report pulled from the dispatch logs indicate that the call was received at approximately 7:08 p.m.

Again, while I typically do not comment on cases that are currently being investigated, after the false statements being made by some were brought to my attention, it became obvious that these were personal attacks made towards my deputy. I felt the only choice was to release the video of the event so the accurate facts could be known by all. In every instance, I will fully execute the duties of my office to ensure that my deputies and staff act in lawful and rightful ways. When my deputies are rightful in their actions, I will fully defend them, rising above the exploitation of social media sensationalism.

The child having no major injury, we must be thankful for the most fortunate outcome in this accidental situation. However, it is also a time to be mindful that as parents, we must remain diligent in our supervision of our children, be they near public roadways, in parking lots or other areas of congested traffic. This same diligence should be had when our children are swimming, near flames at cookouts or there are firearms in a home. Many children experience injuries, minor and major, from incidents that could have been avoided with proper parental supervision. We are all very blessed that this incident did not have a more disastrous outcome.
– Hancock County Sheriff Ricky Adam

WLOX.com – The News for South Mississippi