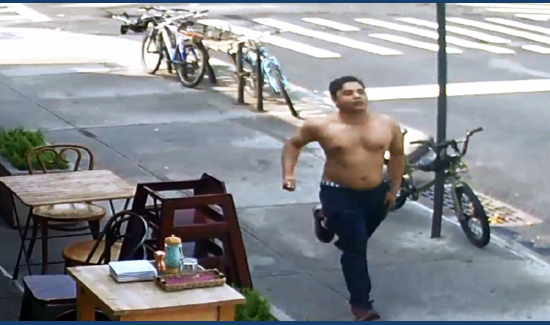 Cops arrested the shirtless perv accused of molesting an off-duty cop on a Queens train.

Police charged 27-year-old Kamruzzaman with rubbing his genitals on the officer’s arm while they were riding a Manhattan-bound 7 train around 10:20 a.m. Friday, cops said.

The officer confronted Kamruzzaman, who ran away after the train pulled into the 40th St.-Lowery St. station in Sunnyside, according to authorities.

Cops said that the man left behind his phone and backpack, leading detectives to him within hours.

“This pervert picked the wrong victim – fled leaving behind his backpack, phone, his DNA, & his dignity. Transit SVU Dets got him within hrs!” tweeted NYPD Transit Chief Joseph Fox.

Kamruzzaman, who lives nearby in Elmhurst, was charged with forcible touching and sexual abuse, cops said. He’s been arrested twice before, according to police.

In 2014, he was cuffed for rubbing himself on a 15-year-old girl on a train as it passed through the Upper West Side. Details about the other incident were sealed.