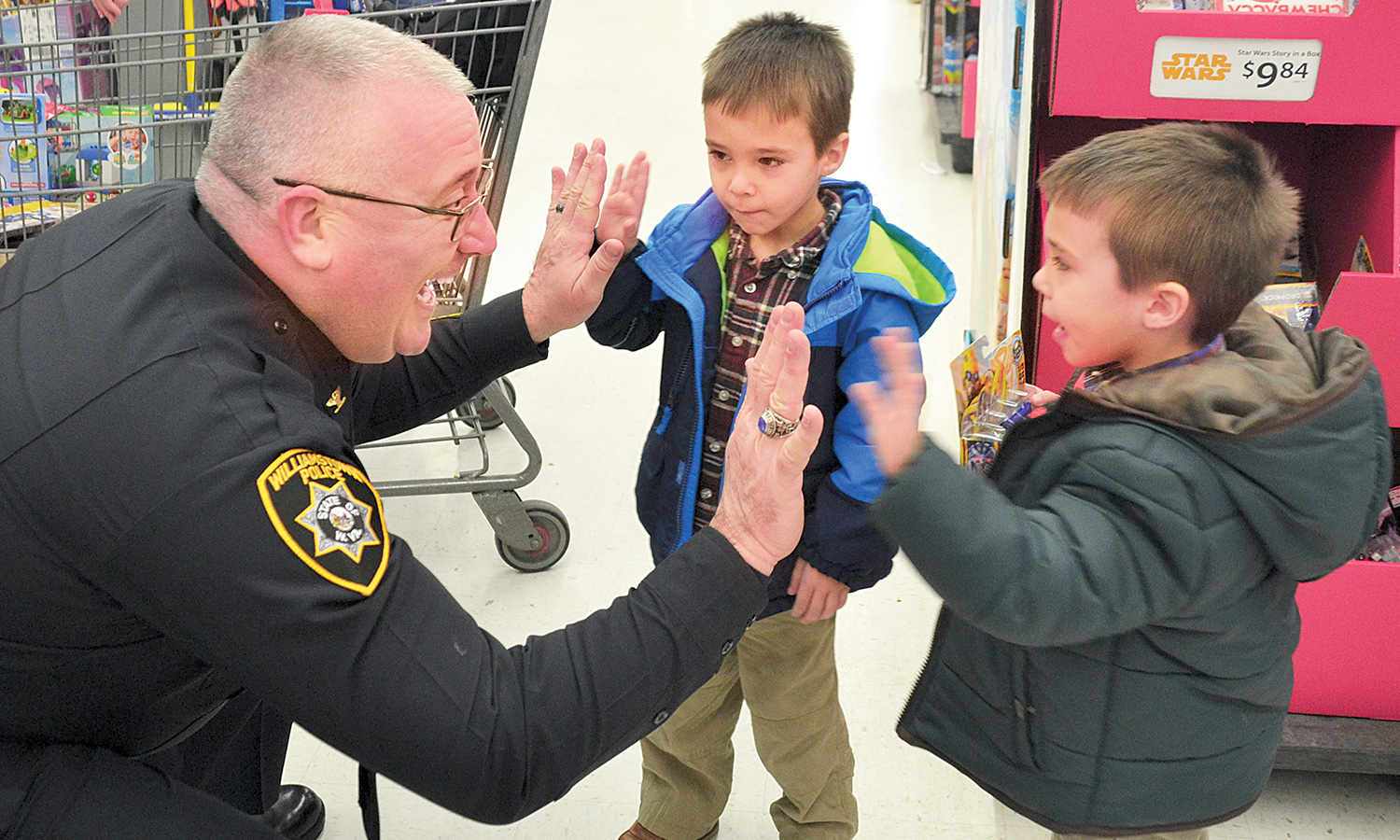 PARKERSBURG — Around 100 local kids will have a Merry Christmas this year thanks to local law-enforcement.

The annual Shop With A Cop event was held Sunday at the Vienna and south Parkersburg Wal-Mart stores. Each location hosted around 50 kids, family members and around 50 law-enforcement officers from local departments.

The Fraternal Order of Police Blennerhassett Lodge 79 raised money through donations so each child could have $100 to shop for things they would like for Christmas. Each kid went around the store with a local police officer and shopped.

“They can get whatever they want,” said Parkersburg Police Department Sgt. B.J. Depue, President of FOP Lodge 79. “They go around with the police officer and hang out with them.

“It is a good experience for the kids, the parents and for the officers involved.”

“When you think of ‘community policing’ this is what it is suppose to be,” Depue said.

For many of these kids what they get from this event will be what they will get for Christmas. There are many kids who do not have a favorable opinion of the police, whether it is because a family member was arrested or from media coverage.

“We are showing people we are not just out here to give people a hard time,” Depue said. “We want to help people.

“Sometimes we have to arrest them to do that.”

The event allows the kids and their families to see officers as people and interact with them on that level.

“If you have an impact on a child when they are young, you are more likely to have a better interaction with them when they are an adult,” Depue said.

Money for the event came from fundraising, telemarketing and donations from individuals and local companies, including Erie Insurance, McClinton Chevrolet, other dealerships and other businesses.

Depue credited Laurea Ellis from West Virginia Department of Health and Human Resources with raising a lot of the money and making Sunday’s events possible.

“It is fantastic,” she said of the program. “We live on a very short income. It really helps because we have full custody of both girls.”

Foster mother Andrea Brady had her foster sons, Caleb and Nathaniel, participate and they went around with Williamstown Police Chief Shawn Graham. When they were done Graham gave both boys high-fives.

Brady said the program is good as it allows the kids to see the officers as people who want to help.

“I think it is that understanding that an officer is nice and that they are good,” she said. “They were really excited to be able to do it.

“It is a very nice program.”

Kenzley Adkins, 5, of Parkersburg, had fun getting the presents her family knew she wanted, her mother Myka said. The young girl had not always had a good opinion of police, but this program helped show another side of the officers as people who want to help.

“It shows her that cops aren’t bad,” her mother said. “They have a job to do, but they aren’t bad.”

Graham said this was a very popular program for the officers to be involved with and everyone involves always enjoys themselves..

“This is one of the coolest things we get to do,” he said. “We have had a lot of happy faces today.

“There is just something special about this. You get a chance to make a kid’s day, but they end up really making our day. Every police officer, police officer’s wife or husband who comes, they really enjoy themselves as much as the kids do.”