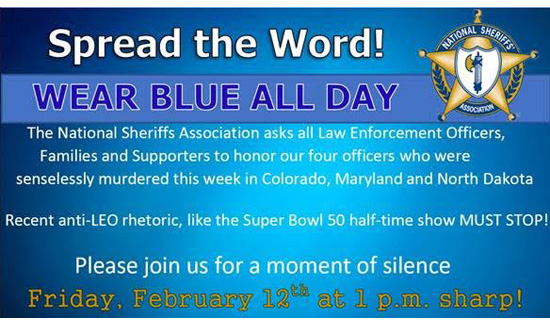 We have lost FIVE law enforcement officers and one additional officer, who will most likely not survive. Just minutes ago, another officer was shot and is on the way to the hospital in critical condition. All in 3 days! This is a sad week for law enforcement.

Wednesday
Harford County, Maryland, Sheriff’s Office Deputy Mark Logsdon, a 16-year veteran, and Deputy Patrick Dailey, a 30-year veteran, were both fatally shot. A witness said, “He just got out his gun and shot him in the head after the officer just asked him ‘How was your day?’ The officer just wanted to see if he was OK or if he wanted some help.”

Fargo, North Dakota, lost Officer Jason Moszer, who was on the scene of a domestic call. He was shot and will not survive, according to the chief.

Tulare County, California, lost a Sheriff’s Deputy (an 18-year veteran) and Pilot when their plane crashed while responding to a suspect brandishing a firearm.

Thursday
In Clayton County, Georgia, an officer has been shot and is being rushed to the hospital in CRITICAL condition.

The National Sheriffs’ Association encourages all law enforcement professionals, first responders, supporters, and citizens to Wear and Display Blue this FRIDAY and join us in a moment of silence to honor and remember the sacrifices of these fallen and injured deputies and officers at 1 PM EDT.

The senseless killing of four law enforcement officers just this week—on the heels of the anti-police “entertainment” at the Sunday Super Bowl halftime show—reminds us that the men and women in law enforcement take a solemn oath that includes putting their lives on the line every day to protect our citizens.

I am so sorry. Great men. They are heroes.