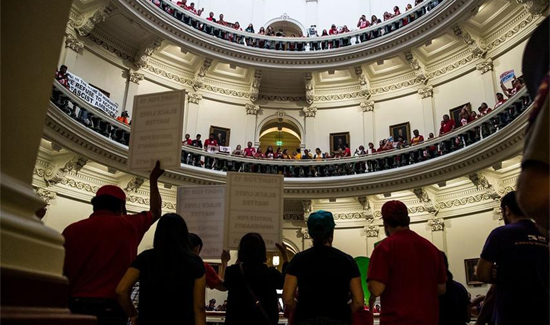 Hundreds of immigrant advocates gathered outside a federal courthouse here Monday as local officials from across Texas squared off for a legal showdown with the state and federal governments over the state’s new anti-“sanctuary city” law.

Mayors, council members and county judges from tiny border towns and big Texas cities were packed inside. One by one, their attorneys called for U.S. District Judge Orlando Garcia to temporarily halt implementation of Senate Bill 4, which aims to force local municipalities to help detain immigrants in the country illegally.

The law, signed by Republican Gov. Greg Abbott in May and set to take effect Sept. 1, allows local law enforcement to ask about the immigration status of anyone they legally detain or arrest, including people stopped for minor traffic violations.

It would also require local police to comply with federal immigration requests to detain people suspected of being in the country illegally. Police chiefs and county sheriffs who refuse could face harsh fines or spend up to a year in jail.

“Local police officers are going to enforce to the hilt, because why take a chance?” Lee Gelernt, an attorney for the American Civil Liberties Union representing the small border city of El Cenizo, told the judge.

He suggested that the law could encourage police officers to conduct traffic stops in areas where there are day laborers and lead to a “situation that incentivizes people to enforce immigration law to the maximum.”

But state and federal attorneys downplayed the effect of the new law, arguing that it did not go as far as Arizona’s contentious Senate Bill 1070 — known as the “show me your papers” law — that the U.S. Supreme Court partially invalidated in 2012.