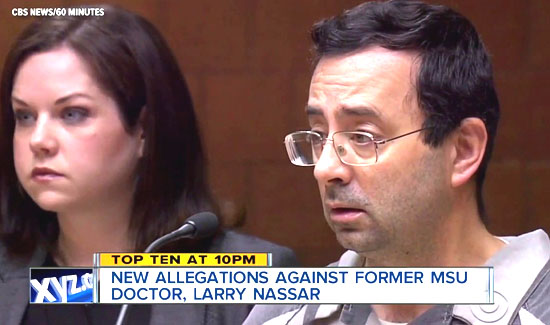 Like so many other victims, Nassar used his position of authority to sexually abuse a child in his care.

Randall-Gay told authorities about what had happened. But Nassar convinced investigators that nothing criminal had taken place.

“You had audacity to tell (police) I misunderstood the treatment because I was not comfortable with my body,” Randall-Gay told Nassar last week during his sentencing hearing in Ingham County Court. “Sadly, they took your word instead of mine.” To their tremendous credit, the Meridian Township Police Department plans to formally apologize to Randall-Gay.

The police department announced Tuesday that it will hold a press conference Thursday where Chief David Hall “will issue a public statement and apology on the handling of the 2004 police report.” New initiatives and training for sex-crimes investigations will also be announced, the department said.

Most cops sign up for the job because they want to catch bad guys and protect the innocent. But sometimes a monster like Nassar doesn’t look or talk like a monster. Instead they’re respected members of the community- even medical doctors.

There were at least eight times Nassar could have been stopped if authorities had listened to the victims instead of the perpetrators.

But we missed those chances. It seems reasonable to think that an apology is in order. But make no mistake- sating you’re sorry and meaning it can be extremely difficult. That’s why the power of apology is so significant.