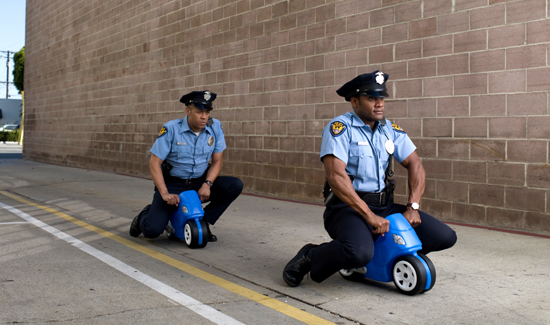 It’s not common but it does happen- a fake cop pulling over a real one instead of the intended victim.

According to Cleveland.com, in Akron, Ohio a man known to be a police impersonator tried to stop an actual Akron police officer.

David Scofield, 50, of Lancaster has already been convicted of police impersonation but he’s apparently back at it.

And that’s because in Ohio pretending to be a cop is only a fourth-degree misdemeanor charge. On his first conviction he got a year’s probation. That didn’t seem to have any impact on the wannabe’s enthusiasm for make-believe.

Like most lunatics that drive around pretending to be cops, Scofield is lucky to be alive. First he swerved in front of an Akron police officer’s personal car on the highway.

Then Scofield shined a spotlight into the officer’s personal vehicle. With ambush attacks on cops on the rise the officer wisely called Tallmadge and Akron police.

A short time later an Akron police officer stopped Scofield’s car. Despite being ordered to stay inside his vehicle, Scofield told police he was a sheriff’s deputy and got out of his car and approached the officer.

Aakron police say Scofield then drew and threw a knife back into his car- apparently in an attempt to hide the weapon.

The Akron police officer arrested Scofield and during a search of the vehicle found several guns and other police gear.

In addition officers found an empty holster and loaded magazine in Scofield’s pocket. He also had two loaded handguns, a rifle, a shotgun, silencers, ammunition, a bulletproof vest, a bogus badge and ID, as well as a SWAT T-shirt.

The weird part is that Scofield is a “decommissioned former reserve deputy sheriff” in Athens County. He was apparently accused of impersonating a certified police officer while he was with that agency.