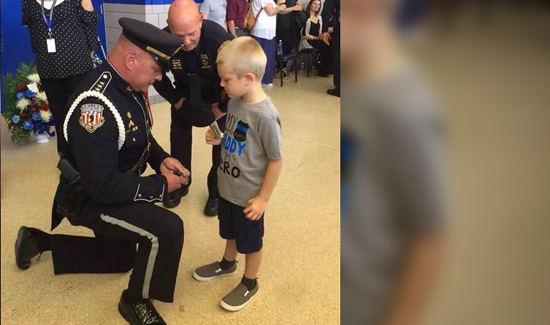 Five-year-old Dakota Pitts returned to school for the first time on Monday after losing his father about a week ago. Dakota’s dad, Rob Pitts, was Indiana police officer for the Terre Haute and Sullivan police departments. Pitts was killed in the line of duty.

The 16-year police vet was fatally shot by a 21-year-old suspect while responding to a call last week.

When Dakota arrived back at school this week, he received a special welcome that gave him the support he needed. CBS affiliate WTHI reports that Dakota asked his mom if one of his dad’s friends could drive him to school. When he arrived at Sullivan Elementary, there were 70 Indiana police waiting outside to give Dakota his very own police escort to school.

The 5-year-old wore his father’s police badge proudly and walked past the long line of officers. The officers also gave him his very own SWAT T-shirt and badge upon his arrival. They wanted Dakota to know they will always have his back.